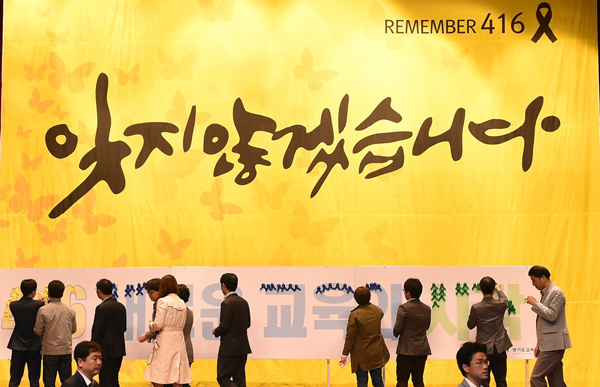 Officials from the Gyeonggi Provincial Office of Education in Suwon pin colorful ribbons on a large screen set up on Friday to commemorate the second anniversary of the sinking of the Sewol ferry. [NEWSIS]

Two years have passed since the Sewol ferry disaster, which sank in waters off Korea’s southwestern coast on April 16, 2014, but for the bereaved families, the ordeal has not yet ended.

The Sewol ferry disaster left 304 dead in the waters off South Jeolla, mostly 11th grade students from Danwon High School in Gyeonggi who were on a field trip to Jeju Island.

As Saturday marks the second anniversary of the Sewol ferry sinking, a number of ceremonies to commemorate the victims were held on Friday all across the country.

High school students in Ansan, Gyeonggi, gathered Friday evening at a plaza in the city center to read aloud their letters to the victims.

At a memorial ceremony held Friday afternoon, the Incheon Metropolitan City Office of Education announced that it would educate children to respect the importance of safety and cherish the sanctity of life.

The square was crowded on Friday with citizens and students who came to pay their respects.

A ceremony originally scheduled to be held Friday afternoon at the joint memorial altar in Ansan, where it was to be announced that the classrooms the victims had used at Danwon High School would be moved, was delayed.

The 10 classrooms will be temporarily preserved in a hall in a building of the Ansan Office of Education. Bereaved families, the school and education offices will discuss when and how the relocation should take place.

Families will be able to visit the site of the sunken Sewol ferry, off the coast of the southern island of Jindo, early Saturday, where the salvage operation is ongoing, and will join the memorial ceremony at Gwanghwamun Square in central Seoul at 7 p.m. The police estimate 4,500 citizens are likely to participate in the main memorial event.

Lee Keum-hee, 47, and her husband Cho Nam-seong, 53, parents of high school student Cho Eun-hwa, one of the students who died in the accident, visited the site again recently.

“I still dream of Eun-hwa,” Lee said. “I believe the nine missing victims, including my daughter, are still in the ferry.”

The Ministry of Oceans and Fisheries aims to finish a salvage operation by the end of July. In order to lift the 8,300-ton ferry from the seafloor, which is 37 meters (121 feet) below the surface, the ministry plans to inject air into the ferry in order to increase its buoyancy and then raise the ship with crane vessels and move it onto a 13,200-ton floating dock in July.

Ministry officials said it would be the first operation in the world to salvage a 145-meter-long ferry from the water.

Only 172 out of 476 passengers aboard the Sewol were rescued, including its captain, all on the first day of the sinking, while 295 were killed. Nine are still missing. The incident is considered to be the worst maritime disaster in the nation’s history.

Experts are saying the probability of salvaging the ferry this year is 50 percent.

“The most important variable is the weather,” said Lee Kyu-yeol, an emeritus professor of naval architecture and ocean engineering at Seoul National University, “If the weather is bad, the salvage equipment may have to be withdrawn or be on standby, increasing the cost and the period.”

The condition of the divers is also a key factor in the success of the salvage operation. As of now, 300 workers, including 90 divers, are living on two operation ships on site, without sufficient food or water.

Once the ferry is put on land, the government will start searching for the bodies of the nine remaining victims. The government is considering whether to put the ferry at a port in Mokpo or Gwangyang, South Jeolla.

Chang Ki-wook, an official at the Oceans Ministry in charge of the salvage operation, said the ferry, which is lying on its side, will be lifted and put on land without changing its position, adding that there will be risks following the search operation inside the ferry.

The ferry was overloaded with cargo, including containers, heavy vehicles and other goods.

Once the search operation ends, there will be discussions concerning the preservation of the Sewol. The ferry is likely to be exhibited in one of the memorial centers. The government is planning to invest 40 billion won ($35 million) to build a maritime security experience center in Anyang, Gyeonggi, and 27 billion won to construct a memorial center in Jindo.