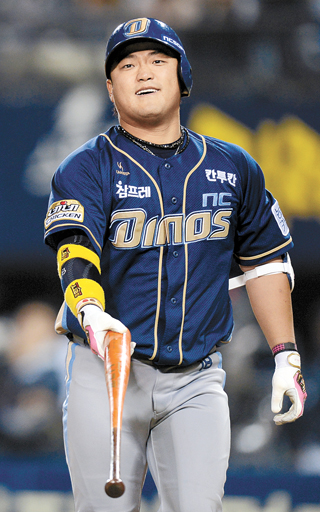 When NC Dinos slugger Park Sok-min returned to his old stomping ground in Daegu for the first time since his transfer, it was a heartwarming experience. While Park greeted Samsung Lions fans, they responded with enthusiasm.

In the Korea Baseball Organization (KBO) game against the Lions on April 12, Park started as the baseman and was fifth in the batting order. It was the first game Park had played in the city of Daegu against his former home team since moving to the Dinos prior to this season.

At his first at-bat of the game, Park took off his helmet and bowed deeply towards the Lions fans in the stadium. The fans responded with a round of applause.

Graduating from a local high school in Daegu, Park joined the Lions in the first round of the KBO draft in 2004. He became one of the main players for the team after he was discharged from military service in 2008. Since then, Park really was the son of the Lions, building his career at Daegu to make a name for himself in the KBO as one of the best sluggers in the league. His numbers with the Lions stand at .297 batting average (BA), or 974-for-3277, 163 home runs and 638 runs batted in (RBI).

Park’s performance was well received by Lions fans who loved the big man. With their support, Park led the Lions to the Korean Series for five years from 2011 to 2015, winning four of them from 2011 to 2014.

But it was time for Park to leave the Lions. After becoming a free agent, Park signed a 9.6 billion won (8.4 million) deal for four years with the Dinos, making him the most expensive free agent in the history of the KBO. Out of his salary, Park donated 800 million won for underprivileged children.

During his speech after winning the Golden Glove for third base last December, Park choked up while saying, “I would like to express my sincere gratitude for the Lions fans who have shown the utmost support for me.” Even after he moved to the Dinos, Park often mentioned his old team and expressed remorse for leaving.

“It feels weird,” said Park after finishing a practice session prior to the game on April 12 in the new home ballpark of the Lions.

When asked how he felt playing against the Lions, Park said, “They know everything about me, including my weak points and that worries me.”

In the first at-bat on April 12, Park’s hit went to Aarom Baldiris, who replaced Park at third base.

During his second at-bat in the fourth inning, Park went to the plate with the Dinos behind 2-11. He blasted a towering home run off a 135 kilometer-per-hour (84 miles per hour) fastball by the Lions starting pitcher Yoon Sung-hwan over the left fence. The true distance of the hit was 135 meters (443 feet), the farthest travelled home run at the new Daegu Samsung Lions Park.

Surprisingly, Lions fans cheered enthusiastically as Park rounding the bases. Granted, the Lions were ahead by a lot, but the message was clear; the Lions fans wanted to congratulate the old son of the Lions. Some fans even stood up to give Park a standing ovation. While many star baseball players have faced their old teams after transferring to different teams, it is a rare for fans to cheer for a former star.

Park’s performance is still top-notch even with the Dinos, leading the KBO with .372 BA, 3 home runs and 12 RBIs as of Yesterday. “We haven’t played that many games yet so I won’t place too much meaning on how I have been doing so far,” said Park. “The start is good for me but the team always comes first.” The Dinos had six wins and seven losses so far.

“I thought it was my duty to express my respect to the old fans before my first at-bat. It was weird meeting the Lions as opponents. I cannot describe how thankful I was for the fans’ support,” he said.