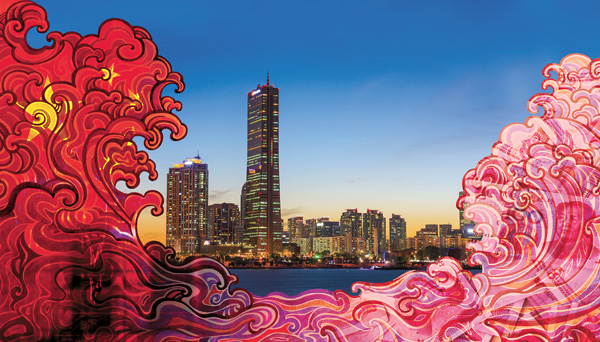 China has been making headlines lately, particularly since the second half of last year, as it has been aggressively increasing the number of its mergers and acquisitions.

The global business community was shocked when GE, the company that was founded by the famous U.S. inventor Thomas Edison, announced it was selling its consumer electronics business to China’s Haier.

A month later, news broke that the once-prominent Japanese electronics consumer company, Sharp, had been sold to Foxconn, a company known to be part of the assembly line for Apple. And not long after that, Toshiba broke the news that it had been sold to China’s Midea Group.

These are globally recognized brands that held substantial market share during the 1990s and throughout the 2000s. That these titans could fall to Chinese companies would have seemed impossible only a few years back, but many are now alarmed that if Samsung Electronics drops its guard, then even Korea’s most representative company could possibly end up with the same fate.

It’s not only the Japanese companies that Chinese investors have been aggressively buying up, either.

ChemChina made headlines in February when it bought the Swiss pesticide company Syngenta for $43 billion, which was the biggest foreign purchase a Chinese firm has ever made.

The last record was in 2013, when China National Offshore Oil Corporation bought the Canadian energy company Nexen for $17.4 billion.

“As the Chinese economy has been decelerating and its companies’ growth lose steam, the Chinese government is encouraging its investors to expand overseas. This, along with a depreciating renminbi, is considered a major factor contributing to these recent aggressive activities overseas,” said Kwon Do-hyun, a researcher at the Korea Center for International Finance.

According to the Korea Center for International Finance, China’s overseas mergers and acquisitions last year reached $118.1 billion, the largest ever. And this year, as of February, it has already hit $85.1 billion.

Chinese investors have also been increasing their mergers with, and acquisitions of, Korean companies. 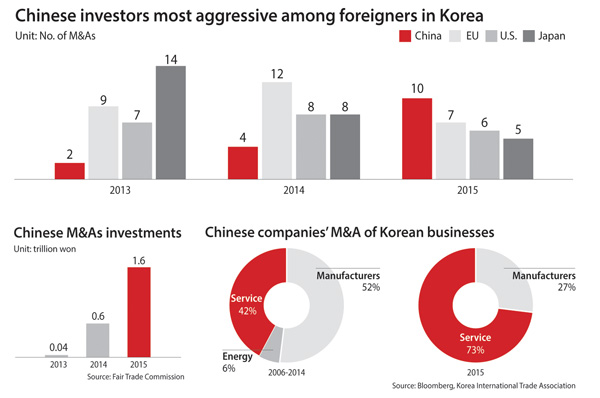 A study by the Korean antitrust Fair Trade Commission found that Chinese spending in order to buy Korean companies increased 167 percent last year from the year before, jumping from 600 billion won ($5.22 million) to 1.6 trillion won.

China has been buying overseas companies with cutting-edge technology and strong global brand power in the hopes of catching up with other advanced economies in a short period of time. As of February this year, they have spent $60 billion on heavy chemicals, pharmaceutical companies and IT companies, which accounts for 71 percent of all mergers and acquisitions so far this year.

It’s not only companies that they are buying up, either, but also major hotels and restaurants. While such global spending only amounted to $2 billion last year, it has grown to $16 billion so far this year.

This is also a trend here in Korea, where Chinese investors have been increasing their stock holdings in cosmetics, tourism and even child product suppliers.

The buying spree by Chinese companies is a stark contrast to that of investors from other advanced economies such as the United States, European Union and Japan.

Chinese investors bought 10 companies last year, an increase from the previous year. During the same period, U.S. investors’ buying of Korean companies dropped from eight to six companies, while EU purchases fell from 12 to seven and Japan fell from eight to five.

So far, Chinese investors in Korea have spent twice the amount of their Japanese counterparts, at $375 million against $161 million.

The Chinese investors’ presence is also felt in the equity market.

As of February, China’s stock investments have shrunk 10 percent from 9.3 trillion won at the end of last year to 8.4 trillion won. They ranked 11th among foreign investors, accounting for 2.06 percent. This was largely because of the market rattle earlier this year, which caused Chinese investors to pull out. In fact, between 2012 and 2014, Chinese investment in the equity market has been growing at 34.1 percent, which amounts to 1.9 trillion won of fresh investments on average. This exceeded the average annual growth of bond purchases of 13 percent, or 1.5 trillion won, during the same period.

Some other experts say that in recent years, one of the key changes in the investment trend of Chinese investors is that they are diversifying more and not only limiting their activity to mergers and acquisitions, but also increasing their stake purchases in major foreign companies, as well as recruiting overseas talent.

There are now roughly 50 companies where Chinese investors have more than a 5 percent stake, and in nearly half of these, they are the majority stakeholder.

More interestingly, these investors no longer sit on the sidelines when it comes to management, as 58 percent were known to be actively participating in key decision-making meetings. This is a stark contrast to U.S. and European shareholders, who are more concerned with dividend payments and the company’s stock value.

Market experts say China has been increasing its investment in the Korean market largely because other advanced economies continue to maintain a loose monetary policy, particularly Japan, adopting an unprecedented negative interest rate in order to prop up its dwindling economy. As a result, Chinese investors needed to find new alternatives with higher profit returns. Experts say bond investments from Chinese investors will likely continue considering that most of the advanced economy’s return rates are unlikely to move, as many, including the United States, continue to maintain the current monetary policy course. Additionally, the Chinese government’s mid- to long-term reform of its financial markets, and lower regulations, is likely to further encourage investors in Beijing to shore up Korea’s bonds.

“As Chinese investment in the local stock market continues to grow, the impact from uncertainties surfacing from the Chinese economy also grows,” said Lee Chi-hoon, a researcher at the Korea Center for International Finance. “Bond investments are relatively safer than equity markets, but not only are the size of investments from China huge, they are heavily concentrated, which means the influence that they may have on the market is that much bigger”