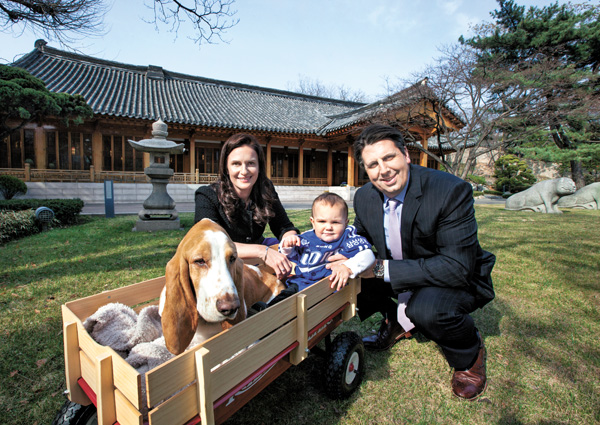 U.S. Ambassador to Korea Mark Lippert, with his wife Robyn, their son Sejun and their dog Grigsby, pose last month in front of their residence, the Habib House, in Jung District, central Seoul. [PARK SANG-MOON]

U.S. Ambassador Mark Lippert is perhaps the only foreign envoy in Korea who mentions his pet dog while introducing his family to the local public. Four-year-old Grigsby, a basset hound, is a celebrity of his own, with over 2,300 followers on a Twitter account that bears his name, @GrigsbyBasset.

So when the time came for the residence tour late last month led by Lippert’s wife Robyn, it was obvious that Grigsby would at one point break into the scene, with little Sejun, the couple’s 1-year-old son, in tow.

With the spry pair restlessly chasing each other around the house, getting them to sit for the family’s portrait required some shrewd tactics. The photographer distracted Sejun with a cartoon featuring Pororo the Little Penguin, while Lippert calmed Grigsby with a wagon ride.

After the photo session, the two returned to their antics, just another day at the U.S. ambassador’s home.

A. I love that the house represents a blend of the U.S. and Korea - traditional Korean architecture with American wood. As former U.S. Ambassador to Korea Richard Sneider said so well, this house is a “wedding of Korean traditional arts and skills to modern techniques of American construction, so it stands as a symbol of our relationship between our two countries: old yet constantly refreshed and reinvigorated by the contributions one can make to the other.”

The diplomatic relationship between the U.S. and Korea dates back to May 1882 with the signing of the Korean-American Treaty of Amity and Commerce. Two years after signing the treaty, an estate near Deoksu Palace was purchased to serve as the official residence and office of the U.S. delegation to Korea.

In 1884, Lucius Harwood Foote, the first American minister to Korea, purchased the property for $2,200 using his own money, as the U.S. State Department had not yet allocated funds for the purchase. A few years later, he sold the property to the U.S. government, and the Seoul government recorded the transaction as “sold forever.”

Left: An inside view of the Habib House, a traditional Korean hanok-style residence made out of American wood. Right:An open-air inner courtyard, nestled beside the public dining room and reception hall, is one of the couple’s favorite areas.

The ambassador’s residence was rebuilt in 1974, and the Legation House was renovated in 2004. In 1974, the team in charge of construction had the challenge of erecting a modern building that would satisfy then-Ambassador Philip C. Habib’s vision for a traditional Korean design while preserving the quality workmanship characterized by the original building.

To meet the challenge, the embassy obtained the services of top American and Korean architects, designers and craftsmen to devise a plan that blended traditional Korean aesthetics with modern amenities, an unprecedented endeavor at the time.

From the U.S. State Department, Melzar P. Booker served as the site manager and Stuart L. Knoop was designated the lead architect. According to Mr. Knoop, it truly was a Korean-American partnership in the design and construction.

The residence bears the name Habib House in honor of Ambassador Habib, to recognize his tireless efforts to maintain the historical symbolism of the house and his contributions to U.S.-Korea relations.

The new residence was completed in 1976 and a total of 12 U.S. ambassadors have since lived here. My family moved here in October 2014.

The open-air inner courtyard, which contains a pond modeled after the abalone-shaped stone watercourse near the site of Poseokjeong in Gyeongju, North Gyeongsang, is my favorite. I’m consistently amazed by the courtyard’s beauty and how it transforms throughout the seasons from when the trees are in full bloom and the fish are swimming in the pond, to the winter when it’s covered with snow. I often sit there while Grigsby plays nearby, and I can hear the drumbeat of the guard-changing ceremony at Deoksu Palace. 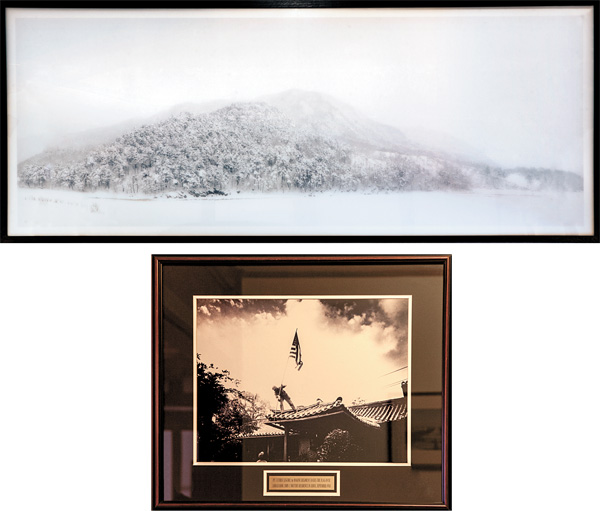 Top: A photo of winter in Yangyang County, Gangwon, taken by Korean artist Boomoon, hangs on a wall in the couple’s dining room. Robyn Lippert says the piece often reminds her of her home back in Vermont. Above: A photo of a U.S. Marine raising the U.S. flag over the American ambassador’s residence in 1950 following the landing at Incheon during the Korean War is displayed near the house’s entrance.

What are your favorite objects?

Through the Arts in Embassies program, operated by the U.S. State Department, Mark and I were able to select various art pieces that are displayed inside the residence. These include photographs taken by U.S. Senator Patrick Leahy of Vermont and other works by Korean artists Boomoon, Ahn Chul-hyun and Min Yun-hee.

At our dining room overlooking the table, there’s a substantial photo of a mountain in Yangyang County, Gangwon, which looks exactly like a typical winter in Vermont, where I’m from. The untitled picture was taken by a local artist who goes by the name Boomoon. It’s absolutely breathtaking, and I feel like I can instantly feel the cold whenever I walk toward this side of the house. It’s as if I can smell the clean air.

And then there’s a picture at the entrance of our house, a permanent piece that was there before we moved in. A U.S. Marine is seen raising the U.S. flag over the residence in 1950 following the landing at Incheon and the retaking of Seoul from North Korean occupation. While the photographer remains unclear, the photo represents a key moment in the history between the U.S. and Korea that a new kind of an end to the war was arriving, and Korea was going to be in the right path.

Just outside our house, there are also two stone statues of mythical lion-like creatures, called haetae, which are traditionally believed to guard against injustice, disorder and fire. I like how it looks like protectors of the house, and it’s an impressive entrance for visitors because that’s one of the first things they see.

Could you explain a bit more about the Arts in Embassies program?

Artists donate to the collection or loan their artwork free of charge for a certain period of time through a contract agreement. The works that are loaned are cases in which an ambassador selects artwork outside the permanent collection. A team of professional curators at the U.S. State Department cultivates and maintains partnerships with thousands of artists, museums, collectors, universities, galleries and foundations worldwide to ensure that artists are compelling, and that exhibitions and collections are engaging, informative and relevant for the intended audience. The exhibitions and collections begin with a study of the host country, involvement in space design and/or review of the floor plans, identifying potential art locations and collaborative projects.