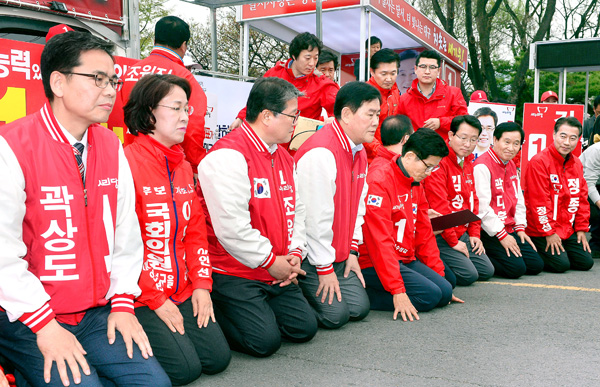 When I was a reporter at an English language newspaper, I had a hard time explaining to the editors why politicians shave their heads and kneel before the people. I couldn’t convince these Santa Fe natives by citing Confucius, “Our bodies, every hair and shred of skin, are from our parents. We must not injure or to wound them.”

The editors didn’t seem to understand how shaving the head shows firm resolution. They weren’t sure about kneeling either. They often asked, “Isn’t it a performance?”

In the last general election campaign, we’ve seen more kneeling and shaving. A Saenuri Party candidate spread a straw mat and took a deep bow of apology as soon as the drama of party nomination turmoil ended. Some candidates shaved their heads for the campaign. Party leaders knelt down to apologize and sang a songs of remorse.

If they felt they had done so wrong, it would be best to step down. But they begged for another chance and asked for more votes. Now I know the editors were right. These apologies were performances indeed.

It has already been proven how ferocious the public sentiments can be. The signs and cheers over the general election results will subside someday. The problem is whether we will forget, or evolve through change. Public sentiment can change anytime. The judgment of the people is grim. Is it only a dream to hope for real politics of accountability that is not swayed by the judgement of the voters? Voters want to grow with the politicians, rather than bring judgment.

In economics and business management, studying failure often leads to success. Tokyo University’s Professor Yotaro Hatamura says that it depends on the possibility of finding potential in one’s failures.

This business strategy applies to political parties, as well. Rather than raising our voices for changes, we should seek change from within. Dartmouth University’s Tuck School of Business professor Sydney Finkelstein can give us some help here.
He says that when smart leaders fail, it is not because they are incompetent, but because they are absorbed in their beliefs and are not willing to change.

Now, politicians need to give up their beliefs and stubbornness and seek changes. Just as the 20th general election result shows, no support is eternal.


*The author is a political and international news reporter of the JoongAng Ilbo.