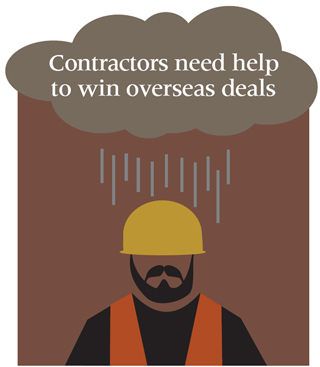 Korean contractors have, over the past few decades, done exceedingly well. In fact, thanks to wealthy oil producers in the Middle East, the industry was one of the most profitable in the world. But with most of these clients now suffering the impact of low international oil prices, the days of living high off the hog seem like a distant dream

Since 2013, many local contractors have started reporting huge losses in the global market, mainly due to its heavy reliance on the Middle East, failure to diversify and fierce competition among local companies, all of which pressured them to sign a deal at lower prices than operational costs. According to the International Contractors Association of Korea (ICAK), Korea only won $46.1 billion in contracts last year, a 30.1 percent drop from the year before. That’s comparable to levels reported during the 2008 global financial crisis, when Korea won $47.6 billion in projects abroad.

Of the total, $14.7 billion came from the Middle East, but the figure dropped by 52 percent from 2014 as big clients like Saudi Aramco postponed their investments.

“Many projects in key markets were taken by rivals from Spain, Italy, the United Kingdom and France last year,” said ICAK spokesman Choi Jung-seok. “Korean contractors will have a tough year again due to the weakening euro.”

Industry insiders argue that Korean contractors need to find new markets and jump into new sectors, but such measures cannot be the ultimate solution since they still depend on sticker prices that businesses offer to clients, which means local companies still need to lower their bidding prices.

Industry insiders say Korean contractors need more experience as developers, although this carries more risk than EPC-type work. According to the Ministry of Trade, Industry and Energy, contractors make an average of 4 to 5 percent profit from EPC-type projects, while most development projects offer more than 10 percent profit.

The 18.4-kilometer (11.4-mile) Incheon Bridge, connecting Yeongjong Island and Songdo International City, was built in October 2009 at a cost of 2.47 trillion won ($2.15 billion). Samsung C&T made 1.32 trillion won of that cost as its builder, while 1.15 trillion won went to British engineering firm Amec, which was in charge of business feasibility tests and planning, and Japanese design company Chodai. The two foreign companies didn’t even carry a single brick.

“Contractors aren’t able to make much profit on those projects as they have to work within the budget set by the client, and yet most of the Korean companies rely on this type of project,” said Jung Chang-koo, director of ICAK’s financial support division.

Development projects account for about 25 percent of the world’s construction industry, and that figure increases to 75 percent when only looking at companies in advanced regions such as the United States and Europe, according to the Trade Ministry.

“Local contractors tend to work as subcontractors because they care more about short-term profits, which they have to announce every quarter,” said Kim Min-hyung, a researcher at the Construction Economy Research Institute of Korea.

“The government needs to create policies that can give financial support to contractors so that they can dive into the area of development. In Japan, an agency like the Japan International Cooperation Agency collects information necessary to launch a business and is also capable of checking the feasibility of each project. Similarly, our government should stop yelling at businesses to earn money overseas and start fostering an environment of valuable support.” 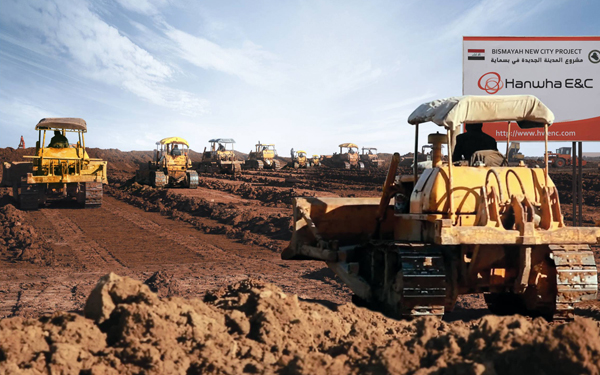 Workers at Hanwha E&C build an apartment complex at Bismayah in Iraq last year. The company will build 100,000 apartment units by 2019 in the city. Such projects are considered boons for local contractors seeking work in export markets. [HANWHA E&C]

The importance of support can be seen in the case of a recent success story that took place last October, when a consortium consisting of Daelim and Lotte Engineering & Construction (E&C) began building a hydroelectric power plant in Gulpur, Pakistan, that will have a total power capacity of 102 megawatts. Daelim and the Korea South-East Power Company have also invested in buying shares of the plant. When the facility is complete, its builders will run the plant for 34 years before transferring ownership over to Pakistan.

But this $367 million project would not have been possible were it not for some clever financing. After receiving approval from the Pakistani government in 2012, Daelim spent the next two years arranging the financing needed to launch the project. As a result, the International Finance Corporation, a member of the World Bank Group, the Asia Development Bank, the Export-Import Bank of Korea and CDC Group of the United Kingdom became partners in the project.

But the global construction industry is now in a period of slow growth, making it difficult to secure such partnerships, even as there are still many demands in developing nations that still need to develop their basic infrastructure. The biggest problem in such nations is that they don’t have enough money to pay for the construction cost.

Recently, clients have been asking builders to finance such projects, meaning that contractors are now turning to banking institutions to borrow the money. But Korean contractors’ financing ability remains behind that of rivals in Europe, Japan and the United States, while Chinese contractors are able to depend on Beijing’s generosity.

Thankfully, Iran and the Asian Infrastructure Investment Bank (AIIB) have become a new hope for Korean contractors. Iran, now free from economic sanctions, is expected to begin work on enhancing its infrastructure. This will include building roads, railways, hospitals and petrochemical plants. According to industry data, Iran was Korea’s fifth-largest market in the world, after the United Arab Emirates ($15.9 billion), Saudi Arabia ($7.2 billion), Algeria ($3.7 billion) and Libya ($3.1 billion), but that was before sanctions went into effect in 2010. The Ministry of Land, Infrastructure and Transport said Iran could be a $50 billion market for the construction industry alone this year, and is expected to grow by an average of 3 percent annually.

Korean companies are accordingly preparing to launch businesses in Iran. Companies like Daelim, Hyundai E&C and GS E&C, which had experience running branches in Tehran before the sanctions, are likely to return. But since Iran’s financial market is still immature, the ability to secure financing will be a major obstacle.

“Under the current low international oil price trends, which have shrunk overall demand in the industry, financing ability is very important in order to attract investment,” said Kim Jong-guk, director of the Middle East market division of the ICAK. “Companies need to utilize systems like ODA [official development assistance] so that they can win more contracts in countries that are relatively healthy compared to developing nations.”

The Korean government tried to help private businesses by establishing the Global Infra Fund (GIF) and Korean Overseas Infra Fund (KOIF), but since the GIF was only able to raise 350 billion won, and the KOIF only raised $2 billion, industry insiders say that the government needs to provide a means by which it can raise enough so that such agencies can embark on larger projects.

Another aid to local contractors is the AIIB. Unlike the World Bank, the AIIB, which has $100 billion and 57 member nations, has as its goal the development of infrastructure in Asia. According to the OECD, the investment demand in infrastructure development in Asia will reach $8 trillion by 2030, and the establishment of the AIIB will help attract investment in that market.

This is an opportunity for Korean contractors to lower potential risks when investing in developing nations in Asia, since the AIIB could raise funds for nations that lack capital. The government said it formed a task force in July to provide strategic support to this end.

“Focusing only on the AIIB is meaningless,” said Ji Man-soo, a researcher at the Korea Institute of Finance. “While providing strategies to deal with the AIIB, the government needs to think about how the country can expand its business in Asia.”

Industry insiders say Korea needs to keep expanding in other sectors such as urban development. Local companies have already gained valuable experience in the domestic market by running large-scale projects such as the construction of Bundang New Town in Seongnam, Gyeonggi. Daewoo E&C and Hanwha E&C recently reached an agreement with Saudi Arabia to build 100,000 houses. The estimated value of the project is about $20 billion, which, if it is finalized later this year, will be the biggest overseas project ever secured.

Local contractors have been relying too much on the construction of plants, as 80 percent of overseas contracts were made in that sector, so the need to branch out is more important than ever, and companies have already begun taking the first steps in that direction. For example, Hanwha also secured a project to build social infrastructure in Bismayah, Iraq, last year. The deal was worth $2.1 billion.