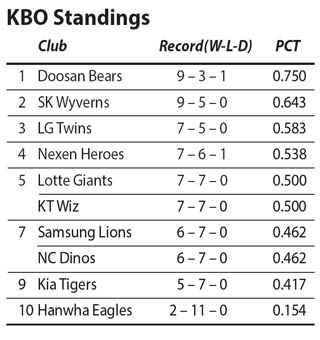 Hanwha Eagles are in trouble after losing five games in just a week.

The Eagles have placed in the bottom pool of the Korea Baseball Organization (KBO) standings in the past several years. In fact, the Eagles finished last from 2010 to 2014 - except in 2011 when they finished second to last.

But the Eagles thought they could spend their way out of their problems this year.

Over the transfer window, the Eagles went buying spree to recruit players from both in and outside of Korea, becoming the club that spent the most on players’ salaries at 144 billion won ($125 million) in total.

But in a home game against Seoul’s LG Twins at Hanwha Life Insurance Eagles Park in Daejeon on Sunday, the Hanwha Eagles lost their fifth game of the week 4-6.

The team’s season record now stands at two wins and 11 losses during the past three weeks. This means the Eagles are now stuck back at the bottom of the league, and looks like they’re not going anywhere unless something drastic happens.

In the game against the Twins on Sunday, Eagles starting pitcher Song Eun-beom struggled, playing in 3 and 1/3 innings while giving out five hits: one home run, one base on ball (BB) and three runs against 14 batters.

Although relievers such as Kwon Hyuk went to the mound after Song to turn things around, they wound up hurting the team more than helping.

As soon as ace reliever Kwon took over, he immediately gave out a double and then allowed a two-run homer to the next batter. Kwon finally conceded yet another hit to the center field off his trademark fastball before stepping off the field. By the time he made it back to the dugout, the Eagles were behind by 0-5.

Even the batting lineup had a rough day, particularly against Twins starter Ryu Jae-kuk, who didn’t allow even a single run during the first six innings he was pitching.

Jang Min-seok, who was fifth in the batting lineup, went 0 for 2 against Ryu and was replaced by Jung Hyun-seok. Jung, however, also had poor showing on the plate, flying out in the seventh inning with two outs and bases loaded.

Batters such as Jang came to the field with bats in hand, followed by stars like first baseman Kim Tae-kyun. Even manager Kim Sung-kun showed up to oversee the session.

The lights stayed on late that night, and all was quiet in the stadium except for the sound of a bat crashing into balls.