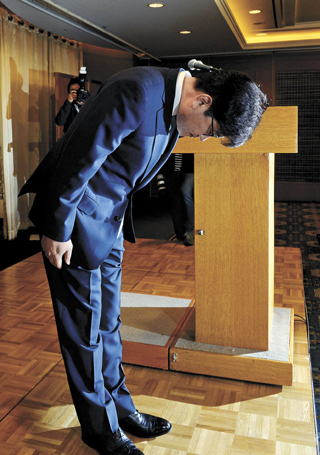 Lotte Mart CEO Kim Jong-in, bows his head low to apologize to consumers and families that suffered from its in-house humidifier cleaner that killed 22 people and harmed 39. The company plans to offer compensation to victims. [KIM HYUN-DONG]

More than five years after humidifier disinfectants killed more than 100 people, including infants and toddlers, Lotte on Monday became the first company involved in the tragedy to make a public apology and offer compensation to victims.

“To the people and their families that had to go through enormous pain and grief regarding the humidifier disinfectants, although it has been too late, I would once again show my deepest apology with my head bowed down,” said Lotte Mart CEO Kim Jong-in at a press conference held at Lotte Hotel in downtown Seoul on Monday. The CEO apologized several times for the belated apology and promised the company will fully cooperate with the prosecutors’ office in its investigation.

Kim said the company will set up a special internal team to compensate people who were harmed by the products.

Although the specific amount on the compensation hasn’t been decided, it is estimated to be in the region of 10 billion won ($8.6 million). Compensation will be made after the ongoing prosecutors’ investigation is complete.

Kim’s public apology is the first from any of the companies involved in the sale and manufacture of the humidifier sterilizer that contained fatal chemicals including PHMG (polyhexamethylene guanidine) which claimed the lives of about 140 people, including infants and toddlers.

According to the government and civic groups, the humidifier sterilizer that was sold at Lotte Mart was its in-house brand or private brand, Wiselect. The product was sold between November 2006 and August 2011. Two investigations by the Korean government found that among those who have used the Lotte products, 22 people died and 39 survived.

According to a civic group Asian Citizen’s Center for Environment and Health, as of January 130 victims reported that families have died or were injured. The civic group in February filed a lawsuit at the Seoul Central District Prosecutor’s Office against 43 former and current executives of the companies involved. It is reported that the public apology by Lotte was actually approved by the group’s chairman Shin Dong-bin. The Chairman told the top executives of the company to take responsibility if any wrongdoing has been made.

Homeplus also made the apology the same day after Lotte’s press conference was held. Other companies which sold the product included OXY, which had the largest number of deaths attributed at 103, and Aekyung, with the second largest at 28 deaths. They have not yet made a public apology.