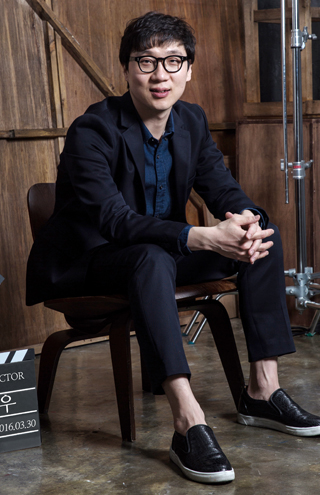 In “The Great Actor,” director Seok Min-u portrays the real lives of actors, filled with joy and sorrow. [STUDIO 706]

There are situations and emotions that should be avoided on purpose: hunger, anxiety over an unknown future and feelings of regret toward one’s family. But an actor experiences all of these while in front of the audience. When an actor is on stage, the only focus is the role that is being acted out.

“The Great Actor” is about the life of an actor named Jang Sung-pil, played by Oh Dal-su. For more than 20 years, Jang has been playing the dog Patrasche in the play “A Dog of Flanders.” The part has neither dialogue nor dynamic action. Jang is merely an unknown actor, who tries his best for himself and for his family.

Through the film, it is possible to see the joys and sorrows of actors. There are comic scenes along with touching scenes, portraying their real lives off stage and off screen.

For filmmaker Seok Min-u, 39, “The Great Actor” is his career debut as the principal director, and he chose to focus on actors. The decision is related to his past career as an assistant director under well-known cineastes such as Park Chan-wook and Kim Jee-woon.

As he once dreamed of becoming a famous director while working as an assistant, Seok wanted the film to be a dedication to the 2000s heyday of the Korean film industry. He also wanted the film to be an ode to the three actors long regarded as the pillars of the film industry in Korea: Sul Kyung-gu, Song Kang-ho and Choi Min-sik, who are represented in the name of the character of the great actor in the film, Seol Gang-sik (Yoon Je-mun), whose name is composed of one syllable of each of their names.

And in the beginning of the film, Seol appears in a Western that is notably similar to “The Good, the Bad, the Weird” (2008). An extra character can also be spotted who looks remarkably similar to the movie’s director, Kim Jee-woon.

But this is not the end to the homage. Later, Jang is finally cast in a film of the fictional director Cannes Park, titled “The Blood of the Devil.” It seems to mirror the film “Thirst” (2009) by Park Chan-wook.

The cameo appearances are another thing to watch for. Moviegoers can have fun spotting actors Yoo Ji-tae, Kim Myung-min and Kim Sae-ron, as well as director Lee Joon-ik. They pop up in unexpected places, eliciting smiles from the audience.

“All the personal connections of mine, and even my acquaintances, have been called out to create such memorable scenes,” Seok said with a smile.

The abundance of cameos, the children’s play, and the homage to hit films are all novel and creative approaches of the director for his debut film.

“I had a lot of fun directing scenes in whatever way I wanted,” Seok said. “I think it is due to a newbie director’s greed.”

Q. How did you come up with the idea of focusing on the unknown joys and sorrows of actors?

A. For eight years, I worked under directors as an assistant director. I have watched numerous interviews and met various actors. I also know how precious the opportunities are for actors, especially the ones who are not well known. Thus, I wanted to deliver a sincere message of encouragement and consolation to them. Actually, my situation is not that different from theirs, as I am also desperate for chances to come along.

Oh said he was surprised by the meticulous details of the film. How did you gather the materials?

When you are in an audition, you not only watch the actors’ acting but listen to their life stories as well. I have listened and collected diverse anecdotes from them. Thus, it was possible to write them down in my screenplay naturally. The role of Nello in the children’s play “A Dog of Flanders” is played by Gu Yong-wan. He is my junior from the department of film and theater at Cheongju University. He is actually a veteran actor of children’s plays. I got a lot of help from him.

Isn’t it hard to say that the ending is a happy one for Jang?

No. I could not even persuade myself to end his story with some kind of a message like “so this is how you can be successful.” Anyone can fail in their career, regardless of their efforts and talent. However, I did not want the character to fail to be a good father and husband. To be a good father is possible for anyone to achieve if one has the mind-set to be one.

Is the conflict and reconciliation in Jang’s family stereotypical?

Yes, and that is what I really intended to show. I wanted the family story to be as normal as possible, so that anybody who watches the film will feel less distanced from the character and his situation. Then, viewers will not see the story as only restricted to the specific occupation.

Do you think you succeeded in harmonizing touching and comic aspects of the film?

Actually, I focused more on the comedy because I did not want the film to be too heavy. In the field, Oh and I constantly discussed the flow of the film in order to not emphasize the emotional side. Already, people know much about the hardships of unknown actors. Thus, I did not have to repeat it in the film. I just wanted people to remember the movie as a comedy or a heartwarming tale.

From top: In the film, Oh Dal-su plays the main character, Jang Sung-pil, who in turn plays a dog in a children’s play; Jang has been an unknown actor for more than 20 years; Yoon Je-mun (left) plays a famous actor, Seol Gang-sik. [LITTLE BIG PICTURES]

How did you cast Oh, since he has been in hit films that sold 10 million tickets?

To me, it is a great honor that my film became Oh’s first lead role. Before this film, I heard that Oh had several offers for lead roles. In 2009, when shooting “Thirst,” I asked him to play a role in my film later. Surprisingly, he remembered my request and kept his promise. Also, he sincerely liked my screenplay, too.

All three actors were on the top of my list to cast. I even thought of canceling my film if Oh did not accept the role. I really like Yoon. I think he looks similar to the Japanese actor Toshiro Mifune, who frequently appears in the films of Akira Kurosawa. I never met Yoon, but I just had vague confidence that he would accept a role that wasn’t a bad guy but an awesome one.

As for Lee, I took the pamphlet of his debut film, “You Know What? It’s a Secret” (1990), in order to get his autograph. When we met, Lee asked me to point out one scene in the screenplay, so I showed him the scene when Cannes Park first meets Jang. He liked it and accepted the role.

Did the scenario strike a chord with the actors?

All the actors in the film said the story was like their own. Some also thanked me for telling such a story. I feel great as a director.

How did you begin your career in the film industry?

After graduation at the age of 26, I had lots of worries about my career. I was also afraid when I heard that in directing, you cannot earn money but face all sorts of hardships. But I decided to experience it just once before giving up, so I went for interviews. Then, with some connections, I got work on “Save the Green Planet!” (2003). I became the youngest one on the directing team for “Old Boy” (2003).

Then you became the assistant director for “Sympathy for Lady Vengeance” (2005). Was it not a quick promotion?

Yes, it certainly was, and totally by chance. At that time, the seniors were all promoted to director, so the position of assistant director was vacant. Unfortunately, I did awfully. Every day, I thought this could be my last working day, and I would have had nothing to say if I were fired. In the field, there are many things to take care of, and that is my job. But whenever trouble broke out, I could not think of how to solve the problem but went to the director for help. If I think back to that time, I still feel sorry for director Park. He is my savior. If Park really had fired me, I might have quit everything.

Did you ask permission from Park and Kim when you made characters based on them for your film?

They both willingly accepted when I suggested the characters that allude to them. Park read the screenplay and found it interesting. And when I told him the investment was decided for the film, he liked it as if it were his own work. Kim also came to the field for shooting. When I told him that the following week, I would shoot a parody of “The Good, the Bad, the Weird,” he told me to cast a handsome actor for his role. The homage is out of my pure respect for them. The time I learned about films from them will never be forgotten. I tried to imitate heavy films like these two directors, but I realized that there was no depth at all. So I decided to film what I can do.

So is that why many viewers feel sincerity in the film?

I think it is because the film was made with honesty. Before “The Great Actor,” I was working on two films, but they were all canceled. If I did not experience such failure, I would have made only stylish films. As I have completed what I really wanted to do, I can go for the challenging films.