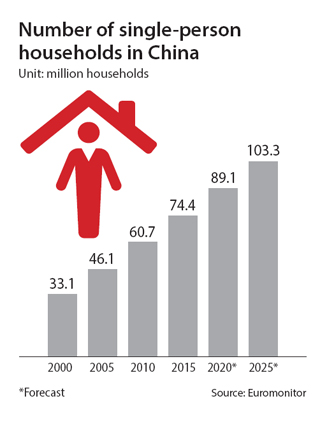 The number of single-person households in China is expected to hit 100 million in ten years and could become a cash cow for Korean companies, according to Korea International Trade Association on Monday,

The number of single households in world’s most populous country was 33.11 million in 2000 but more than doubled to 74.42 million last year, accounting for 16 percent of China’s total population.

Korea, where 30 percent of the population is already living alone, already has many companies that cater to single households, and these companies are hoping to attract the emerging consumer segment in China.

The change from family-oriented shopping to more individualistic consumption patterns can be a boom for producers of conveniently packaged foods, small-size home appliances and pet products.

China’s market for convenient foods, which includes microwavable meals, has jumped 165 percent since 2012, from 200 billion yuan to 530 billion yuan in 2015, according to KITA.

As for home appliances, single households are favoring smaller products that can fit in a one-person apartment. In 2013, small home appliances sales grew 13 percent year-on-year to 114.4 billion yuan and has since climbed continuously. One notable product from Panasonic China was a washing machine designed for smaller apartments that has grown to 52 percent of the company’s total home appliances revenue as of last year.

There has also been increased demand on the mainland for services used most frequently by single households, including help with moving apartments or running errands like sending packages or buying gifts.

The growth in single households has also been tied to an increased interest in pets, which has given a boost to pet-related businesses like grooming and veterinary services.

All of these trends have already been seen in Korea.

The market for convenient food is growing 30 percent every year in Korea, and the boxed lunches sold in convenience stores like CU and 7-Eleven have been doing particularly well.

“Spending per person tends to be higher for single households and their consumption habits are different from those living with their families,” said Kim Eun-Young, a senior analyst at KITA. “Korean companies should look into changing shopping patterns of Chinese customers and offer products and services that meet their newer demands.”