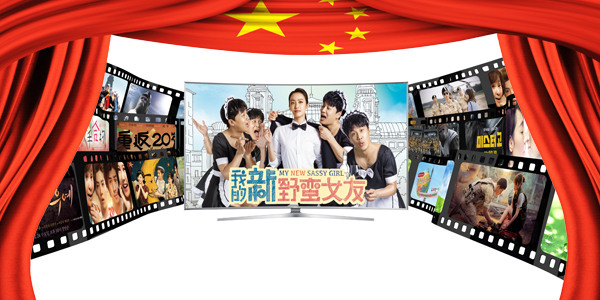 China and Korea are forming an unstoppable alliance - in the realm of entertainment. As Chinese companies bring the hottest trends in Korean film and TV to domestic audiences, Korean producers and artists are making bountiful profits off their newfound access to one of the world’s largest entertainment markets.

Chinese investors used to give a wide berth to the entertainment industry, but last year, entertainment ranked sixth out of 30 business categories in terms of investment, based on data from the Ministry of Trade, Industry and Energy. As a veteran film producer, Shin Chul knows better than anyone about China’s growing appetite in Korea’s entertainment and content industries. When looking for a Chinese partner to co-produce the sequel to “My Sassy Girl,” he was approached by four to five media giants each with handsome proposals.

“My Sassy Girl” is Korea’s third-highest-grossing romantic comedy of all time, and after its release in 2001, it went on to receive favorable receptions in China, Japan, Taiwan and other parts of Asia. Shin sensed the potential for Korean movies, but was also acutely aware of the country’s relatively small market compared to that of neighboring countries like China. Starting his film career in 1978, he produced a series of box office hits including “Happiness Does Not Come in Grades” (1989), “The Gingko Bed” (1996) and “A Promise” (1998), but the movies primarily served a domestic audience. His desire to reach a wider group of fans may indeed come to fruition with “My New Sassy Girl,” the sequel to the previous hit, as the upcoming movie is jointly produced and financed by ShinCine, the producer’s film studio, and Beijing Sky Wheel Entertainment.

Shin’s experience typifies a booming trend in Korea’s entertainment landscape: the growing influence of Chinese capital. China’s media moguls and real estate giants have, for the past three years, tapped into the growing appeal of Korean content and celebrities. In exchange, Korean entertainment players hope to generate massive sales by gaining a favorable distribution arrangement in China, the world’s second-largest film market by box office sales. For like-minded producers, it is an opportune time to pursue collaborative projects as China’s movie makers and media companies are actively seeking such partnerships largely because of the popularity of K-pop stars and Korean dramas.

“China is slated to become the largest film market within two years,” Shin said. “So, the key to success will depend on the Chinese market and having one’s movie take off in that region.”

Analysts say that a series of large-scale investments started being made in 2010 as the pop culture of Korea was introduced to China. Korean content providers in the areas of entertainment, film and gaming subsequently attracted over 1 trillion won ($870 million) between 2010 and 2015, according to Hyundai Securities. The total investment in the entertainment sector that came from China stood at $6 million in 2011, but the figure surged to $86 million last year, according to the Trade Ministry.

“As the number of Internet and mobile users skyrocketed,” said Yoon Jeong-seon, a researcher at Hyundai Securities, “media content from Korea, which shares some cultural common ground, became more attractive to Chinese consumers.”

The power of Chinese capital

Some media moguls from China have been on a buying spree, scooping up a controlling stake in Korean media and entertainment outlets to become the largest shareholder.

The country’s well-known management agencies - from Signal Entertainment to Sim Entertainment - are now owned, at least partially, by Chinese companies. SM Entertainment said in February that it formed a strategic partnership with Alibaba Group. The Chinese e-commerce giant will buy around $30 million worth of SM’s newly issued shares, obtaining a 4 percent stake in the Kosdaq-listed company. The announcement came as Alibaba is transforming itself from an e-commerce giant into a digital merchandising company.

Alongside management agencies, content production companies and computer graphic companies have been under the radar of cashed-up Chinese companies. China’s DMG Group acquired 25.92 percent of Chorokbaem Media’s shares in November 2015, while China’s Wanda Group invested $10 million in Dexter Studios to become the second-largest shareholder. Jung Yoo-shin, a business administration professor at Sogang University, noted that the majority of investments from China involve strategic partnerships that guarantee the participation of management to some degree.

Some of the Chinese players setting their sights on Korean media include behemoths like Dalian Wanda Group, Alibaba and Huayi Brothers.

In the past, partnerships were largely confined to the exchange of staff and celebrities from China, but these days, they include full-fledged joint efforts in investment, production and distribution.

“The two companies will jointly make investments and produce the movies,” said Ahn Jeong-won, head of the international business division at Showbox. “The collaboration will take place throughout all stages, but Showbox will focus on investment, production and set design, while Huayi will concentrate on marketing, advertising and distribution on top of joint investment and production.”

Ahn added that a string of hit dramas, and the popularity of K-pop stars, prompted Chinese media enterprises to seek partners in Korea to co-produce movies and dramas.

But China’s interests are not confined to cinema.

While hugely profitable, these collaborations are not without challenges. For instance, censorship in China means limited artistic expression for Korean artists. And in order to qualify for full co-production, and bypass the annual limit on foreign films currently set at 34, films must be backed by Chinese investment, at least one-third of the production must be shot in China and Chinese actors must play at least one-third of the principal roles.

“China may seem to be pushing ahead, but it is a country with no freedom,” said a media expert based in Hong Kong. “Despite the good human resources and talent that China brings, once the film or drama enters China, every bit of it will have to go through government censorship.”

This explains why many China-Korea movies have such similar story lines involving male and female leads from each country. But some studios make efforts to diversify the genre.

“It’s true that at first, co-produced titles often had dramatic and romantic themes,” said Ahn of Showbox. “But recently, China has seen a growing demand for different genres, which will lead to the introduction of more novel works.”