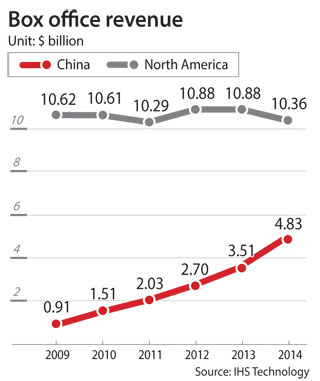 Chinese companies are spending billions of dollars to buy their way into Hollywood to fast-track production of movies that satisfy their insatiable home market.

The acquisition of Hollywood film production company Legendary Entertainment by Dalian Wanda Group earlier this year is by far the largest China-Hollywood deal to date.

The $3.5 billion cash buyout is the latest in a string of takeovers, as Chinese companies push further into the top box office market in the world.

As mainland China’s film market expands at record speed, companies are buying interests in Tinseltown in pursuit of quality content and movie-making know-how.

Box office revenue in China last year was $7.085 billion, a 47 percent increase from 2014, while the North American market only grew about 7 percent, according to IHS Technology.

While monthly ticket sales of the world’s most populous country overtook North America for the first time ever in February - with $1.1 billion, a 70 percent year-on-year jump - film industry insiders speculate China’s annual box office revenue will also surpass North America’s as early as 2017.

Such explosive growth has been spurred by a burgeoning middle class and wealthier consumers whose focus has shifted away traditional assets such as real estate and construction to cultural consumption.

However, there is still a huge gap in terms of creating content that caters to global audiences, and mainland companies are targeting Hollywood as a way to solve the issue.

“Hollywood has what China lacks, which is storytelling ability, marketing, distribution,” Stanley Rosen, a political science professor at the University of Southern California, told AFP last moth. “It’s a win-win situation ... because the China market is really taking off incredibly and Hollywood has a real interest in that.”

Compared to the already saturated North American box office, China has a booming domestic film market and an eager pool of investors to financially back Hollywood movie production. At the same time, China-Hollywood partnerships can aid foreign filmmakers by giving them direct access to China’s box office, where the government allows only a limited number of foreign films to be released each year.

Dalian Wanda Group, led by China’s richest man, Wang Jianlin, was among the first to make aggressive moves to exploit the demand.

“We already have a big impact in China,” Wang was quoted as saying by the Los Angeles Times in January. “However, this is not enough - we have to have a global vision.”

The first film from the partnership is the $150 million sci-fi action movie “The Great Wall,” which has Chinese and U.S. cast and staff. The English-language movie is directed by Chinese filmmaker Zhang Yimou, and stars Matt Damon, William Dafoe and Hong Kong singer and actor Andy Lau.

Industry insiders expect the film to be a litmus test for the China-Tinseltown relationship when it is released in China in December and two months later in the United States.

Adjustments to various aspects of Hollywood films are expected as co-produced movies need to contain Chinese elements such as characters, plots and locations to bypass the country’s quota on foreign films.

One of the most successful collaborations was “Kung Fu Panda 3” (2016), which earned 1 billion yuan ($154 million) in the domestic market and also did well in North America, according to Xinhua news agency.

It was animated in California and Shanghai, and producers, DreamWorks and its spinoff Oriental DreamWorks, put special effort into aligning voice and lip movement for U.S. and Chinese languages.

“Our final purpose is to create movies like ‘Kung Fu Panda’ by ourselves,” CEO Chen Derong of Guangdong Alpha Group’s interactive entertainment division told Xinhua. “The key will be finding a good Chinese story and telling it appropriately.”