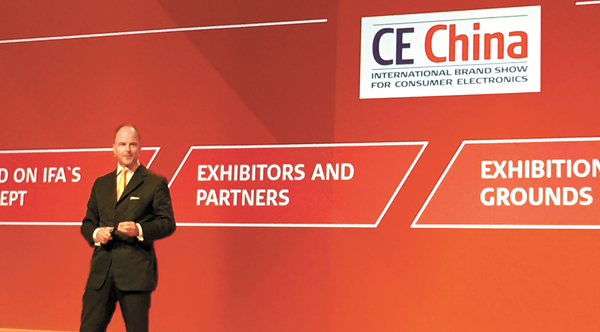 “China is the global market where we can provide citizens broader access to consumer electronics from around the world,” said Dr. Christian Goke, CEO of Messe Berlin, ISA’s host, in a press conference on Monday. He noted that Shenzhen, often called the Silicon Valley of China, is one of the country’s “fastest-growing cities, ranked amongst China’s top cities in terms of the quality and level of innovation.”

The event in Shenzhen was made possible by support from e-commerce giant Alibaba and Suning, a major retailer, he added.

IFA, short for “Internationale Funkausstellung Berlin” in German, takes place in September every year in Berlin and typically invites tech journalists from around the world to its “Pre-IFA Global Press Conference” every April to provide an overall preview of the upcoming fair and talk about trends in the tech community.

This year, IFA broke its decade-long tradition of holding the annual press event in resort cities across Europe - including Malta, Dubrovnik and Sardinia - to hold it in Hong Kong two days before Consumer Electronics China takes place.

Jurgen Boyny, global director of consumer electronics at the German market research firm GFK, predicted that the booming concept of the “connected consumer” will extend as long as the next 15 years. He cited the skyrocketing middle class in Asia, urbanization and the growth of single-person households as the key propeller of the trend.

Udo Jansen, global director for small domestic appliances at GFK, noted that the small-sized consumer electronics products in the fields of health care and beauty have been increasingly popular in Europe.

Whereas the Consumer Electronics Show, which places every January in Las Vegas, is focused on cutting-edge technologies and devices, IFA is more about consumer goods in trends such as TVs, refrigerators and washing machines.

The venue for the next IFA press event may change again next year, and Seoul is one possibility, the organizers said.

One possible factor motivating a change would be the issues some journalists had receiving visas to attend the event.