3 parties agree to open a session

3 parties agree to open a session 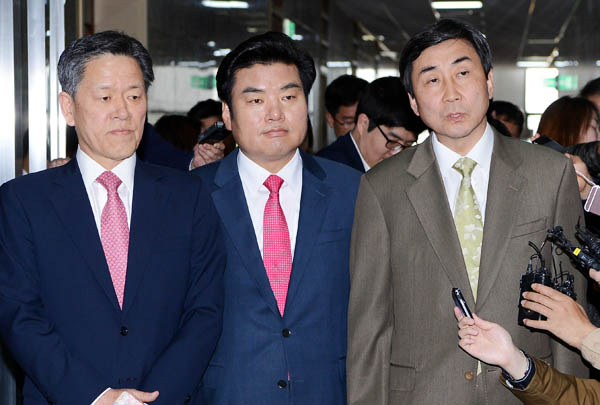 The three main parties agreed on Monday to hold a legislative session starting this week to conclude the final month of the 19th National Assembly.

Floor leaders of the Saenuri Party, Minjoo Party of Korea and People’s Party met in the morning along with National Assembly Speaker Chung Ui-hwa to discuss the legislative schedule for the final month of the 19th National Assembly. They agreed to hold an extra session from Thursday till May 20 to discuss pending bills.

According to Rep. Joo Seung-yong, floor leader of the People’s Party, each party will decide on the bills that it finds crucial. The deputy floor leaders of the three parties will meet again to negotiate on those bills, he said.

The 19th National Assembly’s four-year term will end on May 29. As of Monday, the Saenuri Party is still the largest party in the 292-member legislature, as it controls 146 seats. Minjoo lawmakers occupy 102 seats, and the People’s Party occupies 20.

And yet, the victorious sentiment of the winning parties from last week’s general election for the 20th National Assembly was evident during the negotiation. Rep. Lee Jong-kul, the floor leader of the Minjoo Party, said Monday that the people have rejected President Park Geun-hye’s initiatives, citing the humiliating defeat of her party in last week’s general election.

In the 20th National Assembly, the Saenuri Party was reduced to being the second-largest group, winning 122 seats in the 300-member legislature, while the Minjoo Party won 123 seats and the People’s Party won 38.

Lee said the voters expressed their opposition to the economic bills promoted by the Park administration, including the service industry advancement bill and labor market reform bills. “The 19th National Assembly must work based on the people’s judgment,” he said.

“The people handed down judgement on the president having looked down upon the legislature and ruining parliamentarianism, the basis of democracy,” Lee said. “The people rejected her wrongful exercise of power and barbaric politics, in which she removed a ruling party’s floor leader for having disobeyed her.”

Rep. Yoo Seong-min, floor leader of the Saenuri Party, stepped down from the floor leader post after Park condemned him for striking political deals with the opposition to pass a public servants pension reform bill pushed forward by the administration. Yoo left the Saenuri Party on the eve of the election and won the race on Wednesday as an independent.

Lee also said the National Assembly should consider economic bills proposed by parties other than Park’s, such as bills creating jobs for small and midsize companies and real estate measures to protect tenants from skyrocketing jeonse, or lump-sum deposit rent, prices.

Rep. Joo, floor leader of the People’s Party, said the 19th National Assembly must conclude its final days smoothly through compromise and mediation. He said the mandate for the special investigation committee on the 2014 sinking of the Sewol ferry should be extended beyond its current schedule, which ends in June, because the ship is expected to be salvaged in July. While the opposition leaders issued lengthy and strongly worded remarks, reflecting their victories in the general election, the defeated ruling party’s floor leader, Rep. Won Yoo-chul, gave a brief comment.

“The 19th National Assembly faced the strongest criticism for being the worst, and the Saenuri Party is largely responsible for it,” Won said. “We apologize to the people once again. During the remaining days, we should do our best to produce the best possible outcome.”

Following the opening remarks, the three floor leaders continued a negotiation for about 30 minutes. According to sources, National Assembly Speaker Chung requested the legislature to deliberate his bill to revise the National Assembly Act. The proposal is intended to loosen the current requirement of 180 lawmakers’ support to designate a contentious bill as a fast-track item to bypass some complicated legislative procedures. Chung proposed that the requirement be 151 votes and that a bill’s deliberation period also be shortened.

According to the legislature, 10,074 bills will be automatically discarded if the legislature fails to pass any by the end of its term. Of them are 70 bills aimed at preventing child abuse.

A proposal to allow housewives to subscribe to the state-run pension program, a bill that will allow automatic mediation of a medical dispute and a bill designed to strengthen punishment on clinics that recycle disposable needles will be discarded if they are not voted on before the end of the 19th National Assembly.