A different kind of pecking order

A different kind of pecking order 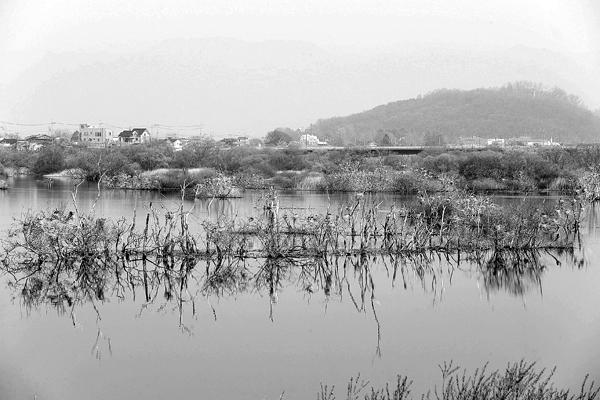 Trees in the white, dotted lines are willow trees at the bottom of Soyang Lake, Chuncheon, Gangwon, damaged by the excrement of great cormorants. [PARK JIN-HO]

The increasing number of cormorants in Korea is posing a great threat to major landmarks as their excrement is high in acidity and thus lethal to plants and trees.

The famous willow trees near the bottom of Soyang Lake, Chuncheon, Gangwon, are now all white. The excessive accumulation of the bird’s excrement has disturbed the photosynthesis process, causing chlorosis, a common plant disease caused by a lack of nutrition.

As the number of the lake’s great cormorants, which migrate to Korea each winter, rose from 100 in 2009 to 300 today, the popular tourist attraction has slowly lost its charm.

“Chuncheon set up an observatory since the place is a major destination for photographers from all over the nation,” said Kim Hyeon-woo, 37, who lives near the lake. “It’s urgent that we take some measures to solve this problem, such as driving the great cormorants from the lake.”

Reducing the environmental damage done by the cormorants, however, is easier said than done. The removal of the great cormorants from the Soyang Lake will not put an end to the problem, as they will likely move to other nearby environments.

For the time being, Chuncheon has been conducting hydro-jet cleaning at Soyang Lake to protect the willow trees.

In Sokcho, Gangwon, despite the city’s efforts using water bomber helicopters to keep tourist attractions clean, 200 out of 250 pine trees on Jo Island have died as a result of cormorant excrement. The island is one of Sokcho’s eight famous sights.

In 2013, Sokcho planted about 250 more trees, but according to an ecological study in 2015, only 30 were still alive. The city planted 100 additional pines in 2015 and is planning to neutralize the soil on the island this month.

Seoul is not an exception to the harms posed by cormorant excrement. The number of great cormorants on Bam Island, near the Han River has tripled from 427 in 2010 to 1,506 in 2015. Most of the trees on the island have been devastated.

To restore the island’s environment, the Seoul Metropolitan Government, in addition to regularly cleaning the island during the breeding and migratory periods of the great cormorants, also plans to assign three cleaning vessels, five cleaning auxiliary vessels and about 100 public officers and volunteers to the task.

For a more efficient restoration and ecological study of the island, the metropolitan government has prohibited ordinary visitors from entering the place.

The willow trees near the Seoho Reservoir in Suwon are also suffering from chlorosis due to the presence of about 500 cormorants. According to the National Institute of Biological Resources, the number of great cormorants in Korea has increased 39 times, from 269 in 1999 to 10,723 in 2016.

“In the past, the cormorants stayed in Korea only during the winter, or temporarily during the spring and fall while they migrated to China,” said Dr. Kim Hwa-jung from the animal resources department at the National Institute of Biological Resources. “But recently, the birds are being seen in Korea throughout the entire year. They even breed here.”

Among the 32 species of cormorants that exist, Korea is home to three species - ordinary cormorants, great cormorants and pelagic cormorants.

“These problems are arising because now the cormorants stay in Korea all four seasons,” said ornithologist Yoon Moo-bu, an honorary professor at Kyung Hee University. “Since there’s no specific preventative measure, the government has to actively step in and devise solutions.”