Journalists discuss the media and nukes

Journalists discuss the media and nukes 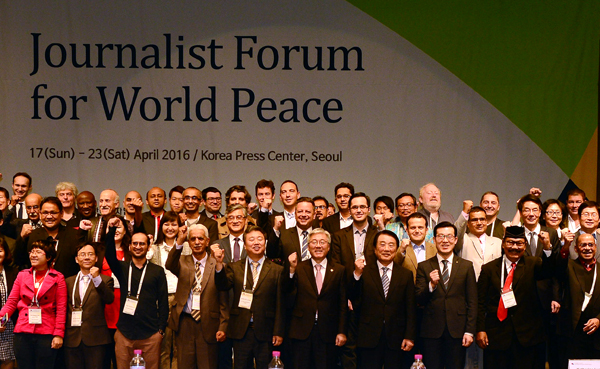 More than 70 journalists pose for a photo at the Journalist Forum for World Peace in Seoul on Monday. Participants included Minister of Culture Kim Jong-deok, fifth from the right, front row, and Jung Kyu-sung, president of the hosting organization Journalists Association of Korea, fifth from the left, front row. [NEWSIS]

“We can no longer afford to be pushed around by North Korea’s deception and intimidation,” said Vice Minister of Foreign Affairs Lim Sung-nam at the Journalist Forum for World Peace. “North Korea’s nuclear issue, which has plagued Northeast Asia and beyond for more than 20 years, is a man-made issue and I believe that we can find a solution to this problem.”

Participants echoed the need for the global consolidation of journalists in calling for the denuclearization of North Korea.

“It’s our duty as members of the international media to keep these issues at the forefront of the discussion worldwide,” said Jessica Rowe, senior producer of MediaWorks in New Zealand.

There was a general agreement among reporters that at the government level, pursuing multilateral talks may be the best answer as of now.

“It is important for Japan and other parties to continue discussing and closely coordinating, in order to keep the momentum on [recommending] the six-party talks going,” said May Graziella Masangkay, a staff reporter at Kyodo News.

“The only way to turn the situation around is to restart the six-party talks as soon as possible,” said Qimin Wu, deputy director of the international news department at the People’s Daily in China.

But some participants made it clear that leaving things up to the government is not enough.

“The governments at stake will cooperate on policymaking, but the media needs to stay actively involved,” said Hong Duck-ryul, president of Daegu University. “The media needs to report on the movements by the people and civil and nongovernmental organizations, putting efforts into bringing peace to the peninsula.”

Yet for many journalists, writing on North Korea remains difficult, as there is a dearth of information available on the country.

“I interviewed Hyeonseo Lee, a defector who wrote ‘The Girl with Seven Names,’ and my impression during the interview was that she was telling the truth. But how can you check all those things?” a reporter asked during the conference.

Writing on North Korea can be even more difficult for domestic reporters.

“We are still technically at war so it is quite burdensome for South Korean journalists to write on this issue,” said Choi Woo-suk, deputy editor at Chosun Ilbo. “But we [the reporters] are part of this whole thing. We must not distort the picture, and we must strive to write only facts.”

The Journalists Association of Korea has been hosting the conference annually since 2013.

This year’s visiting journalists will be traveling throughout Korea for five days, wrapping up their schedule with a coordinated visit to the demilitarized zone and Pyeonghwa-Nuri Park.