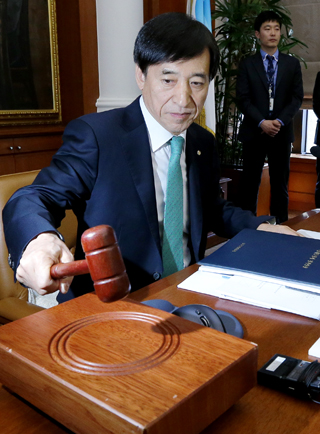 The Korean central bank joined other international and local analysts in giving up on a 3 percent economic growth estimate for this year, citing growing uncertainties in the global economy and a disappointing performance in the first quarter.

The Bank of Korea (BOK) on Tuesday readjusted its economic growth forecast for this year to 2.8 percent. In January, it predicted 3 percent.

“The reason we lowered our annual growth outlook is because first-quarter performance failed to reach our expectations in January, and because of the revision in trade and global market growth due to various reasons including falling crude prices,” BOK Gov. Lee Ju-yeol said.

“The uncertainties significantly increased outside of Korea,” he continued, “such as the sharper deceleration of Chinese economic growth from what we anticipated; the sharp drop in crude prices; and uncertainties from the Fed’s monetary policy direction.”

Korea’s Ministry of Strategy and Finance is the only institution to remain optimistic, projecting 3.1 percent growth. The BOK’s new estimate raises the question of whether the ministry will also cut its forecast.

Other institutions, including the International Monetary Fund as well as Hyundai Research Institute and LG Economic Research Institute, have hinted that they might be lowering forecasts for Asia’s fourth-largest economy.

Although the central bank’s outlook is now below 3 percent, it is still relatively higher than think tanks, which have lowered their projections to the mid-2 percent range.

“We haven’t changed our view that the economy started seeing a mild recovery since the second quarter,” Governor Lee said Tuesday. “Facility investments, which struggled in the first two months of this year, have rebounded, and exiting the first quarter, the Korean economy will start showing mild improvement.”

The governor also cited uncertainties in the global market.

“The Fed’s interest rate hikes are moving up at a gradual pace, while concerns over a sharp fall in growth in China have eased and crude prices are starting to rebound,” Lee said.

LG Economic Research Institute said that even though several economic indicators have been improving, an actual economic recovery is unlikely to take place this year.

“This is largely because exports, which are most important in deciding the country’s economic direction, will struggle as the global market’s demand for durable goods has been shrinking, while China and emerging markets - whose main businesses are exporting commodities - have been cutting back on their facility investments,” said Lee Geun-tae, a senior economist at LG Economic Research Institute. “This year, we expect negative growth in exports.”

Lee even added that declining exports will eventually spill over to the domestic economy, as poor company performance will affect both the job market and the average employee’s income.

Although the Chinese economy grew at a market consensus of 6.7 percent in the first quarter, which is within Beijing’s target of between 6.5 and 7 percent, that growth was the slowest in seven years since the global economic meltdown of 2008-09. 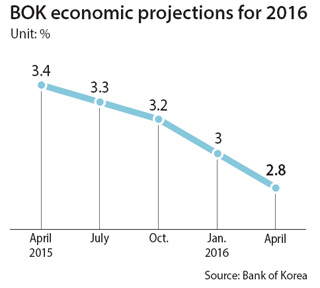 Many analysts have urged the central bank to take more aggressive stimulus actions as Korea’s economic outlook turns bleak, including a type of Korean quantitative easing, following the lead of other economies including Europe and Japan. Europe last month cut its interest rates to a new low as part of an expanded quantitative easing program, while Japan adopted a negative-interest-rate policy, its first.

During the recent general election campaign, the Saenuri Party promised to force the Korean central bank to adopt a type of quantitative easing program.

“As the government’s attempts to resuscitate growth are likely to be stymied, the onus of policy loosening falls even more heavily on the Bank of Korea,” said BNP Paribas economist Mark Walton in a report released after last Wednesday’s general election.

Despite market expectations of a cut in the nation’s key interest rate, the central bank on Tuesday froze the seven-day repo rate for the 10th consecutive month, the longest streak since the rate was held at 2.5 percent for more than a year between May 2013 and July 2014.

“As you know, we have decided to keep the key interest rate at the current 1.5 percent,” Governor Lee said. “When we looked at external conditions since last month’s monetary policy meeting, we came to the conclusion that uncertainties in the global market have somewhat eased thanks to major economies further loosening their monetary policy, while international financial markets have recovered their stability.”

The central bank governor has been reluctant to further lower the key interest rate, frequently citing the limited effect it would have on the Korean economy at this stage.

During a visit to Washington, D.C., last week, Lee said Korea needs to manage its monetary policy to prepare for worse. He has stressed more defensive measures such as restructuring debt-ridden companies.

“There’s a need to clarify the difference between Korean quantitative easing and those of advanced economies, where the purpose is to increase money supply after a near-zero interest rate failed to make a difference,” Lee said. “For us, the purpose is to reinforce the BOK’s exclusive authority to print money for the purpose of the country’s [corporate] restructuring.”

He emphasized that the role of the central bank is to create an environment where such a restructuring process could be executed smoothly so that the nation’s economy can maintain stability.

But Lee said the Korean economy has not reached the point where the BOK has to reinforce corporate restructuring, adding that it will step up in times of need, such as in a credit crunch.

However, there are still signs that the central bank could lower the key interest rate, as the vote wasn’t unanimous. In fact, one of the members of the monetary policy committee, Ha Sang-geun, proposed a rate cut.