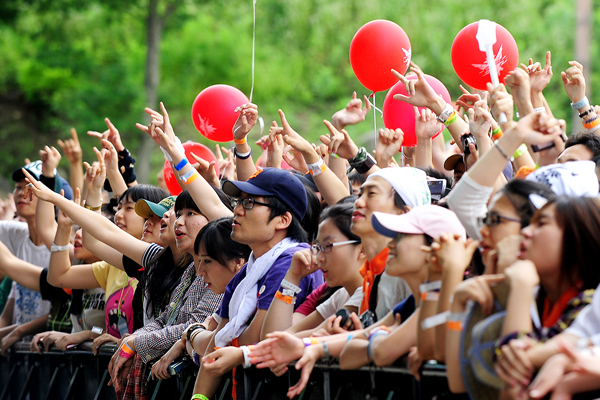 July 22-24: Listed as one of the 50 greatest summer rock festivals by CNN in 2013, the festival this year has invited global acts such as the Red Hot Chili Peppers, Travis and Squarepusher. Korean artists Hyukoh, Guckkasten, and Kim Sawol X Kim Haewon will also take the stage.

The festival is set at the scenic Jisan Forest Resort in Icheon, Gyeonggi, where attendees can enjoy both music and nature.

Second-round tickets are on sale for 208,000 won for three-day entry.

May 14-15: Beautiful Mint Life, a festival that welcomes spring in Seoul, is marking its seventh anniversary. It aims to provide people with the opportunity to enjoy a weekend of acoustic sounds.

May 21-22: In addition to Guckkasten, No Brain, Rose Motel, Lee Seung-hwan, Crying Nut and Coffee Boy, the festival has recently added more than 40 artists to the lineup, including Loco, Gray, Oh Ji-eun and Saltnpaper.

The festival started in 2010 with the aim of enabling people to share their ideas for making the world a better place; it is also known for being environmentally friendly and inviting lesser-known artists.

June 10-12: Originally from Miami, this electronic music festival is celebrating its fifth year in Seoul.

Unlike in previous years, this time, the festival will run for three days, with 100 acts in the lineup. Star DJs such as Afrojack, Avicii - who helped make electronic dance music mainstream - Axwell, Ingrosso and Martin Garrix are among the acts.

The timetable and schedule will be announced soon.

Tickets cost 220,000 won for three-day entry at the advance price.