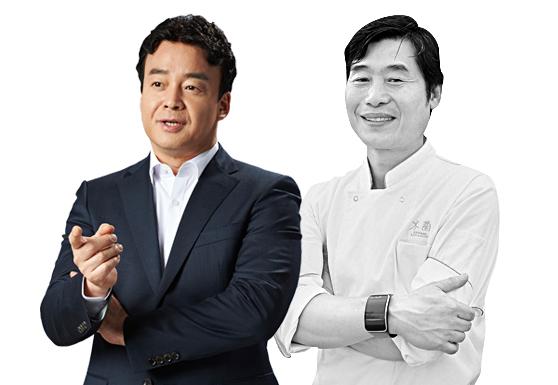 Star chefs Beak Jong-won (left) and Lee Yeon-bok have stepped up to be part of a campaign to improve consumer consciousness.

The video titled “No-Show, You Can Be the Victim,” made by the Fair Trade Commission and the Korea Consumer Agency, features many people working in the service industry, including the two stars.

The video stresses the severity of not showing up for reservations or appointments, a pervasive phenomenon in Korea.

“It is a shame that our country ranked dead last,” Baek said in the video, pointing to the fact that Korea is the country with the highest rate of broken appointments at restaurants, hair shops and other service providers.

“Once the reservation is made, we strive to provide the best service and food possible,” said Lee, the chef and owner of the famous Chinese restaurant Mokran. “But what if the customer doesn’t show up for the reservation?”

The video explained that such a habit can also be detrimental to other customers who missed out on the opportunity. Several victims of the practice, including the mother of a sick child trying to see a doctor, talked about their past experiences to support the campaign’s claim.

The Fair Trade Commission and Korea Consumer Agency announced that the video will be distributed on Wednesday via mainstream portal sites in Korea, public transportation systems and universities.