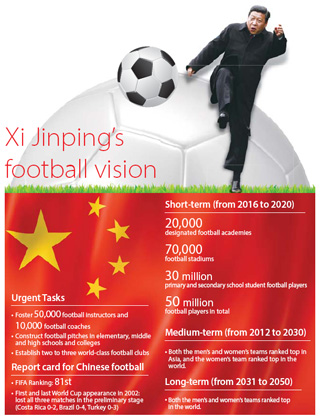 China aspires to be a titan in football, and it plans to get there before 2050.

The Chinese Football Association published a detailed report on April 11 with an interim plan to achieve its goal, including rearing 50 million footballers by the year 2020 and dominating the Asian region by 2030.

One of the first steps taken by China has been its huge financial investment in recruiting world-class footballers during the most recent winter transfer window. The spending eclipsed all of the European leagues and was intended to herald China’s ambitions in the sport, as well as boost the popularity and overall level of the mainland’s football leagues.

The development of Chinese football is one of the passions of Chinese President Xi Jinping, who is known to be an avid football fan.

One of the most notable aspects of the report filed this month is the sheer volume of resources expected to be devoted to the initiative.

China looks to increase the number of football players to 50 million by 2020, including 30 million primary and middle school students. This will involve a huge amount of new infrastructure nationwide, and the report calls for the construction of 70,000 official football stadiums, as well as mandates that at least one football pitch is installed in all newly built apartment complexes.

Eventually, China aims to provide one football stadium per every 10,000 Chinese.

The Chinese women’s team is currently ranked 12th in the FIFA World Ranking.

By 2050, both its men’s and women’s national teams should be “football superpowers” according to the report.

To raise talent from early on, China will focus on fostering football in schools.

Over the next five years, 20,000 schools will be designated as football institutions. Primary, middle, high school and college leagues will be organized and teams will compete at the district, regional and national level.

The report also contains detailed plans to combine other industries such as tourism, construction and restaurants with football to create a new industrial ecosystem. China will also provide various perks to renowned football stars that visit or join Chinese clubs, including making the immigration process easier and paying for the education of their kids.

But despite the efforts promised, some remain pessimistic about China’s chances to dominate outside of Asia.

“Chinese football is already ranked fifth or sixth in Asia, and so topping the region in 14 years should not be a problem,” said an expert in Chinese football. “However, topping the world by 2050 is more of a wish rather than a realistic goal.”

Although all these initiatives seem to be intended to narrow the gap in football skills between China and the rest of the world, some analysts say the China Football Development Plan might have ulterior motives.

“It is interesting that National Development and Reform Commission introduced development plan for a single sport when the overall Chinese economy is in stagnation,” said Cho Young-nam, a professor of Chinese Politics at Seoul National University Graduate School of International Studies. “It is possible that president Xi’s version of populism involves exploiting sports for political purposes.

“It is a similar move to Korea’s military regime in the past that promoted professional baseball to appeal to the general public. But the plan is different from Korea’s in that it is a long term agenda, looking at the next 35 years,” Cho added.

The question remains whether the Chinese men’s team will be able get a good start by qualifying for the 2018 Russia World Cup. Ranked 81st in the FIFA World Ranking at the moment, China is expected to face a tough challenge after being allotted into the same group as Iran (42), Korea (56), and Uzbekistan (66), in the final round of the 2018 Russia World Cup Asian qualifiers.