What about Incheon airport?

What about Incheon airport? 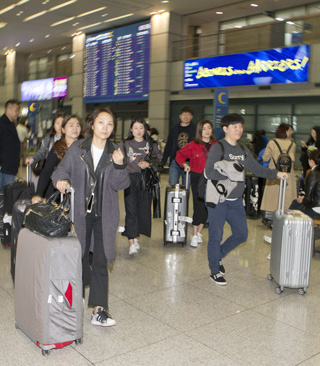 When it comes to the airport, New York was always dreadful in my memory. After a 14-hour flight, I had to wait an hour or two to get through immigration. It is not that I was especially unlucky. Until 2013, New York’s John F. Kennedy International Airport was notorious for its long wait times at immigration. Whenever the media raised the issue, U.S. Customs and Border Protection always argued that it could not be helped since international arrivals were increasing every year, and JFK was the busiest airport with the most foreign visitors in the United States.

So I was pleasantly surprised when I visited New York last week after three years to attend the International News Media Association conference. Instead of waiting in line for hours, I could breeze through automatic passport control at the self-service kiosk. Of course, Incheon International Airport also has the automated kiosks, but they are exclusively for Koreans. Automatic passport control in the United States can be used by any Visa Waiver Program visitors who have ever visited the country. It also offers eight languages, including Korean.

According to the U.S. Customs and Border Protection website, automated passport control was introduced first in Chicago in August 2013 and is now in use at major airports. It maintains world-class security while providing improved services. In 2015, 112 million foreign visitors entered through airports in the United States, 5.1 percent more than the previous year. But the total wait time at the top 10 international airports in America was reduced by 3 percent. The wait time at one airport decreased by 27 percent.

The astonishing service upgrade at JFK made me think about Incheon International Airport. Last year, the average entry time was 29 minutes, but foreigners’ experiences were different. Earlier this year, the security system was breached as a Chinese couple illegally entered, and foreigners have had to wait as long as the notorious days at JFK. After the unpleasant experience right after arrival, foreign visitors won’t have the most favorable impression of Korea.

While New York, the most celebrated tourist destination in the world, is making efforts to make visiting more convenient for foreigners, Korea may have been too arrogant for the past 10 years because of Incheon International Airport’s title of “best airport service in the world,” while the two CEOs appointed through favoritism wasted time.


*The author is head of the new digital team at the JoongAng Ilbo.