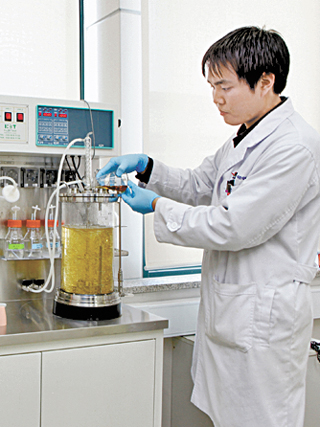 Researchers experiment with yeast fermentation at the SPC Research Institute of Food and Bio Technology at Seoul National University. [SPC]

Bakery giant SPC, the operator of the Paris Baguette chain, and Seoul National University have discovered a native yeast that can be used in baking and producing leavened bread, the group said on Tuesday.

The find is a major milestone for both the bakery industry and academia, since the country has few indigenous yeasts for bread-making. The new yeast, named SPC-SNU 70-1, is the second edible yeast to be patented, although SPC is the first to commercialize traditional Korean yeast.

The yeast is the outcome of 11 years of joint research between SPC Research Institute of Food and Bio Technology and Seoul National University’s agricultural biotechnology department.

Researchers collected and analyzed over 10,000 traditional microflora extracted from kimchi, honey and other fermented food, and gathered samples from pristine areas in Mount Jiri in South Gyeongsang, Mount Seorak in Gangwon and Lake Chungju in North Chungcheong.

The patented yeast was extracted from traditional Korean nuruk, a leavening agent used in making liquor.

“Yeast is used in a variety of foods, but there are few traditional Korean yeasts,” said Seo Jin-ho, a food science and biotechnology professor at Seoul National University.

“The discovery can be considered a major achievement in the fermented food industry.”

SPC said the research surrounding the discovery of natural yeast is very rare, underlining the importance of the latest discovery.

“The yeast is ideal for making tasty bread in various aspects,” said SPC spokesperson Jang Seung-hoon. “For one thing, it is suitable to make a soft-texture bread, and it has little micro spawn in it.”

SPC will use the yeast in 27 bread products. Other affiliates, including bread manufacturer Samlip, also plan to use the yeast.

“Since we need to modify production lines and a new manufacturing process, it would cost more than before to make bread with the newly found yeast,” the spokesperson said. “But we don’t have any plan to raise prices.”

SPC registered a patent last year, and the registration procedure is underway in France, the United States, Japan and China.