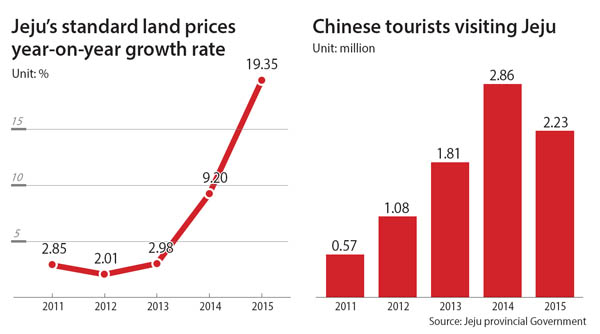 The southern island of Jeju is often known as the island of three abundances, or “Samdado,” a reference to its volcanic rocks, strong winds and beautiful women.

But locals on the island say that these days, the three abundances have changed to vacation homes, coffee shops and Chinese tourists.

The number of Chinese tourists traveling to the island has surged lately. In 2005, over 115,000 Chinese visited the island. This rose to three million in 2014. And with the growing number of Chinese tourists, Chinese investors have been pouring money into the island’s tourism industry. In fact, 62 percent of the buildings owned by Chinese nationals are lodging facilities such as hotels, resorts and condos. If apartments and rooms that are rented out to tourists are included, that figure grows to 92 percent.

“Many Chinese are interested in small-sum investments, or investing less than 500 million won [$440,000], to operate vacation homes or condos on Jeju,” said a representative at one of the real estate firms that work solely for Chinese in Jeju. “We do have customers coming straight from China, but many of them are already residing or temporarily staying in Korea and are looking for lodging facilities to do business here.”

Such growing investments have been affecting property prices.

The standard land price in Jeju jumped 19.4 percent in February compared to a year ago, according to the Korean Ministry of Land, Infrastructure and Transport. This is the sharpest year-on-year growth of any land prices across the country. The national average growth rate of land prices during the same period was 4.47 percent.

Furthermore, a study by Statistics Korea showed that Jeju had the highest growth rate in service industry productivity and retail sales last year. Jeju’s service sector productivity rose 6.7 percent year on year in the fourth quarter of 2015, and its rate is two times higher than the national average rate of 3.1 percent.

“Real estate and leasing services accounted for 25 percent of total productivity growth in Jeju,” Statistics Korea said in a press release in February. But there are some concerns that the Jeju government is giving away too much land in exchange for boosts to its regional economy. While ownership by Chinese investors continues to grow, the benefits are unlikely to be felt by Jeju locals.

The lodging facilities owned by Chinese investors have a better chance of attracting tourists from China than those owned by locals, as there are no language barriers.

As a result, businesses owned by Chinese investors are likely to disproportionately benefit, while Korean locals will be all but left out, as has already happened with tourism agencies in Korea, for much the same reason.

“More people became eligible to receive larger amounts of loans since the prices for their homes have soared, but in the long term, the excessive leverage could actually become a major risk for the local financial market,” said Ko Bong-hyun, a senior researcher at Jeju Development Institute’s economic review paper, released last month. “Low- to mid-income earners in Jeju, and those who want to resettle to the island, are now having a harder time finding places to live since prices have risen rapidly.

“Additionally, Jeju’s economy has been benefiting from new migrants and companies resettling to the island, but this momentum might weaken in the future.”

There has also been growing criticism from locals regarding reckless development projects by Chinese investors that harm the natural environment of the island. Because of such concerns, the Korean government is tightening its grip on foreigner development permits. The government said it believes that there are too many condos and lodging facilities on the island, which are hurting the scenery and local ecosystem. Under the changes, the government will only allow foreigners to invest in specific zones designated as tourism sites. Previously, in 2010, the government allowed foreigners to obtain five-year visas if they invested more than 500 million won in local real estate. Foreign investors could become permanent residents five years after their first visa.

But these recent real estate investments by Chinese investors have been losing their momentum, as interest has been shifting to other industries.

“Chinese investment in Korea rose to $1.98 billion last year from $1.18 billion in 2014,” said Kim Jae-hong, CEO of the Korea Trade-Investment Promotion Agency, in an interview with the JoongAng Ilbo earlier this month. “Some 70 percent of total investment went into real estate in 2014, but it only accounted for 8 percent last month.

“They are now focusing on the finance, retail, manufacturing and cultural industries.”