Plastics business owner has a daring vision for Asia's future

Plastics business owner has a daring vision for Asia's future 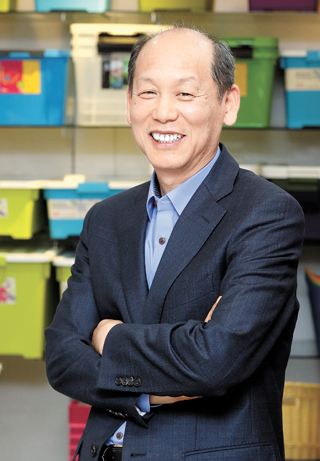 Lock & Lock CEO Kim Jun-il, 64 years old, established Asia Development Foundation, a non-profit foundation, with 2 billion won ($1.76 million) from his own pocket. He aims to expand the foundation to a size of 50 billion won gradually, an enormous size for a head of medium sized company to handle.

Kim was born in Daegu and was brilliant to graduate from a recognized middle school in the region. However, he gave up going to high school due to waning fortune of his family and left for Seoul to earn money. He later passed Qualification of High School Graduation and entered Korea National Open University.

In 1978, he began his own business by selling imported products then grew his company to become a “small-giant” company with annual revenue of 400 billion won and 5,000 employees in local and overseas branches. The company deals with rather uninterested material of the time, plastics, but he has grappled with the material his whole life to build up the company. From selling plastic airtight containers, the company has expanded to kitchenware business as well.

Now by launching a new foundation, he says he already made up his mind to leave nothing for his three children and spend it on the foundation for the development of Asian countries and multicultural families from those countries.


Q. Many people think of you as an entrepreneur with unique world of mind

A. Well, I have always deliberated on what the inner world is about. I was curious where humans come from and why they are born. The questions that made me struggle for the last 20 years are things like ‘what is the most important thing in life?’ and ‘what is something the human race is missing out on?’ I have not yet found answers to those questions.

I’m also interested in number three. People usually have dichotomous way of thinking and separate things into me and others, allies and enemies, men and women, up and down and yin and yang etc. But I am more interested in the third scene, something additional to a way of separating things in two. I think comparing oneself and others is the starting point of ruining the human race. That is why number three is important. I have speculated on the meaning of things with three properties such as truth, goodness and beauty; knowledge, virtue and physique; Heaven, earth and human.


It’s a little difficult to understand

It is for me too. I just suppose there is ‘third something’ out there in the world. Wouldn’t there be something that is beyond brain power?
I was inclined to hide away into the mountains to seriously work on these questions when I was young. My family stopped me from doing so. Still, the questions have always bothered me. The curiosity led me to the Taoism of Laotzu. I read his work of philosophy, the Tao te Ching, and worked hard on ki-spirit training, a kind of meditation. However, I couldn’t make out a definite answer to my questions.


It sure is a difficult topic. Why don’t we change the subject to your goals for Asia? The Asia Development Foundation that you initiated. The name seems grandiose what are some plans you have for the big continent?

Hearing you talking about it, the name does seem quite grandiose. I named the foundation Asia but I was referring to areas around Northeast and Southeast Asia. I aim to find something similar between countries clustered in the Northeastern Asia such as Russia, China, Japan and Korea by various networking. Secondly, with what we found through networking, I want to put effort in helping out countries in the Southeast Asia. Third, regarding people Asian countries, I want to support multicultural families.


Why are some reasons behind your goals?

My business career has been tough. I grappled with developing better plastic all my life when nobody even cared. And most part of my business has its basis in Asian countries such as Vietnam, Myanmar and Laos. If I didn’t work with those countries my success would have been very difficult.

As for the four countries in the Northeast Asia, we have been in constant quarrel. I dream of us working together for a better future. Regarding multicultural households, I think many would sympathize with me on the issue. We should help them feel Korea is a proud home country for them as well.


Why does it have to be Asia?

The future of Korean economy depends a lot on Asian regions. It is also what Kim Woo-choong, the founder and former chairman of Daewoo Group always emphasizes. He is working to gain his feet in Vietnam right now.

We have to enhance sustainability of our economy by cooperating with countries in Asia where they have great potential for growth. Thus, the foundation holds detailed plans to train experts on Asia. You can imagine it to be something similar to a training academy for Asia region experts. I recall Samsung Group training their local experts through a past series of program.


I hear Samsung’s local expert program is often introduced in MBA classes of U.S. universities. I’m curious what detailed plan you have to train future experts.

The program I’m thinking of is to open a local expert program jointly with renowned universities in Vietnam, Myanmar and Laos then recruit ambitious youths in Korea to be sent and trained locally. The program is of course free of charge.


It sounds like a lot of funding is needed. Wouldn’t it be a burden for a small-giant company?

It’s true there is a financial burden. That’s why I already announced to my three children that there will be no inheritance for them. They have agreed to my terms. I funded 2 billion won for the foundation last month and I plan to put in 5 billion won next year. I will gradually increase the funding to ultimately operate a 50 billion won foundation.


Considering the size of your company, it is an amazing goal. However, I must address problems regarding foundations in Korea where they start with big dreams but finish dull. There are even some citing there is no successful public foundation in Korea.

Your are right. There are foundations which started out big but proved to be fruitless. But there are still some successful foundations like the Korea Foundation for Advanced Studies. So before I die, I want to make sure that the foundation I head attains permanence. I will create measure to keep the foundation from collapsing so soon.


For a 400 billion revenue earning company, I think the bathroom is quite modest and simple. What is the small writing on the bathroom wall?

It is a frame from an acquaintance of mine. But since the writing is too scribbled I always have to explain to people. It refers to a phrase in the Analects of Confucius that describes person with appropriate minds and has no evil. It is the type of life I want to live.


Many people thing plastic is not environmentally friendly material since it is not easily disassembled. Some even think the material is a cheapie.

It’s a misunderstanding. Technology has developed over the years and now plastics are designed for disassembly. I see that plastic has an image of being cheap and low quality but imagine a world without plastics. Life is not possible without plastics.

In Korea, plastic is specially important in the beauty sector. Think about the term ‘plastic surgery.’ Plastic materials including silicon are necessary for such surgery. Those beauties made through plastic surgery owe plastic big.
Plastic is used in diverse product portfolios including kitchenware.


What is your hobby? It seems you will start meditating once you have free time.

Yes well, I did that a lot in the past. But I found there is no answer even after some time of meditation. These days, I run for an hour if time allows. I also listen to music. I favor Nανά Μούσκουρη. New age musician Yanni is good too. I like new age sound tracks despite my age.

I read books as well but it’s rare for me to read the book through the last page. I tried to read the book History of Three States several times but never got to read the ending of the story. It just felt like I should stop reading when Guan Yu died. I know it may sound weird but my reading life has ended entirely with the death of Guan Yu.

Lock & Lock CEO Kim Jun-il shows off a mysterious aura. He doesn’t seem at all ordinary. It feels as if in a different dimension of the world as conversation with him becomes serious. But he has the soft charisma enough to charm the conversation partner. He is up for something noble and important by establishing a new public foundation.

A former Harvard University professor Samuel Huntington had cited Asia will become the future source of growth for the human race. It felt as though CEO Kim’s attempt to embrace the Asia continent brings up Huntington’s teachings back to life, during the interview.