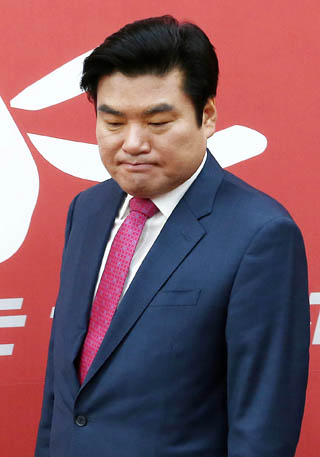 The interim head of the Saenuri Party promised Tuesday that he will surrender the temporary leadership as soon as the next floor leader is elected, as he faced strong resistance from the lawmakers-elect even before he started the term.

Following the humiliating defeat in the last week’s general election, the entire leadership of the Saenuri Party resigned, naming Rep. Won Yoo-chul, the floor leader of the party, as the interim head. The party also said last week that the National Committee will meet on Friday to formally endorse Won as the new acting chairman.

The decision, however, faced strong opposition by many lawmakers and lawmakers-elect, particularly the adversaries of President Park Geun-hye, who refused to endorse Won as their acting leader due to his ties to the president.

Seven lawmakers, who scored victories in Wednesday’s election, also held a meeting on Monday night and formed a group to overhaul the Saenuri Party. Reps. Kim Young-woo, Lee Hag-jae and Hwang Young-cheul, who won their third-term last week, and Reps. Park In-sook, Oh Shin-hwan, Joo Kwang-deok and Ha Tae-keung, who will begin their second terms in the 20th National Assembly, founded the group.

Rep. Lee was the chief-of-staff to President Park when she was a presidential candidate. Rep. Joo served as a political affairs secretary in the Park Blue House.

Expressing their disapproval of Won’s acting leadership, they demanded that the party withdraw its endorsement of the appointment, adding that the Saenuri’s lawmakers-elect should hold a meeting to offer their opinions about an interim leadership.

They also said they will start a signature drive with Saenuri lawmakers and election victors to protest Won’s interim leadership.

As complaints grew, and signs of a retuning factionalist split in the ruling party emerged, Won said Tuesday that he will minimize his term as the interim head.

“In order to overcome this emergency as soon as possible, we should elect the floor leader quickly, and I will hand over the interim chairmanship to the new floor leader,” Won said Tuesday. “It is lamentable that signs of conflict are showing again.”

“Assuming responsibility of the crushing election defeat, the entire leadership of the Saenuri Party stepped down the next day,” he said. “As a member of the leadership, I, as the incumbent floor leader, also offered to resign. But the Supreme Council asked me to manage the party until the party convention to elect new leadership.”

A party official said Won originally planned to oversee the party until the party convention, which will be held in a few weeks, but he then decided to shorten his term as the acting leader until the election of the new floor leader.

The party convention, the highest legislative organ of the party, is responsible for electing the new chairman and members of the Supreme Council. Originally scheduled for July, the event has been moved up, with an election for the new floor leader expected to take place in early May.

After meeting with the reformist lawmakers on Tuesday afternoon, Won said the National Committee will not meet on Friday as scheduled to officially name him as the interim head. The committee is an organization consisting of 1,000 delegates responsible for deliberating and voting on various party-related issues.

Instead, Won promised to hold a workshop meeting of the lawmakers-elect first on May 26.

Won and the lawmakers met for about 50 minutes, and Won accepted most of their demands, Rep. Hwang said. In return, lawmakers decided to suspend the signature drive for the time being.