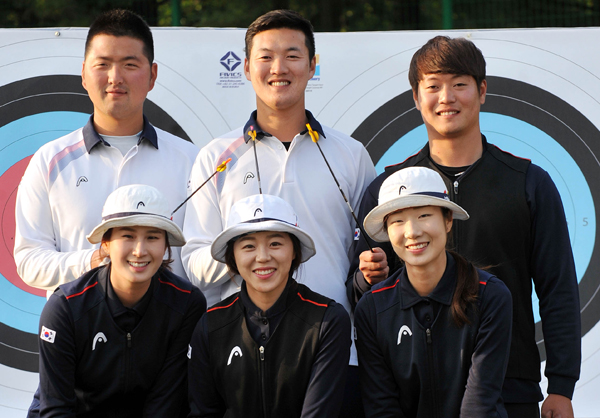 Members of Korean national archery team for the Rio Olympics pose for photo after securing their positions in the team on Tuesday. Archery is a gold mine event for Korea in the Olympics. The six archers will travel to Brazil this summer to take a shot at the Olympics medals. [KIM SUNG-TAE]

Korea’s archery team for the Olympics was finally decided earlier this week, and the moment was marked with tears of both joy and disappointment.

Chang Hye-jin, ranked seventh in the world, burst into tears after shooting her last arrow during the final round of tryouts on April 19. She’d finally secured her spot on the roster.

It marked the end of a long and arduous journey for Chang, who failed to make the team four years ago for the 2012 London Olympics.

After the tryouts, Chang tried to console Kang Chae-young (World No. 4), who failed to make the cut and was also in tears.

Making the nation’s Olympics squad is an eight-month journey, and it begins with a fight to join the national team.

After the first round in September 2015, 64 archers (evenly split between men and women) made the cut.

Only 16 of those survived the second round in November 2015.

But making the national team doesn’t guarantee a spot on the Olympics team roster since only six archers can compete in Rio this summer.

That roster was determined after two rounds of qualifiers, one from April 1 to 5 and the other from April 15 to 19.

The 16 national team archers shot about 4,000 arrows in competition.

“Korea’s Olympics qualifiers are, simply put, demanding,” said Kim. “I just pass out at the end of each day. Days like today are the worst since it is decided who gets to go and who doesn’t.”

Four years ago before the 2012 London Olympics, Kim tasted the bitterness of failure, despite topping various events before the qualifiers.

“I envy Ku that he was able to make it into the team in his first try. It was terrible for me four years ago,” added Kim. “I was in agony. I spent some days drinking and took some time off to go travelling. But I came back after a week to straighten myself. That’s why I am here today.”

When asked about what it feels like to earn a spot on the Olympics team, Ku said, “I am just grateful that I am given the opportunity to attend the Olympics.”

Oh Jin-hyek, the gold medalist from 2012 London Olympics in the individual event, participated in the qualifiers with a quiver labeled “Olympics champion,” only to have his hopes shattered after placing sixth in the tryouts.

The Korean Olympic archery team selection process is strict, and even athletes that have previously medaled like Oh get no special privileges.

Ki, who belted two golds at London in 2012 in women’s team and individual events, couldn’t attend the 2014 Asian Games in Incheon after failing to qualify for the Asian Games national team.

“Fair competition is our motto and thus we don’t give perks to the athletes that have excelled in the past,” said Kim Ki-chan, the vice president of the Korea Archery Association.

Paradoxically, such a merciless qualifying process is what makes Korean archery so competitive.

“For the Korean archers, even the qualifiers are great competitions since the Korean archers are all top-ranking athletes and thus their global rivals,” said Moon Hyung-chul, the head coach of the national team.

Chang Hye-jin (World No.7, one gold and one silver medal in 2014 Incheon Asian Games)