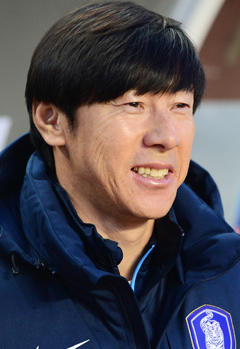 Arriving at Incheon airport on Wednesday after attending the Olympics Football Tournaments draw on April 14 at Maracana Stadium in Brazil, Shin said, “The draw was going well until we got assigned with Germany at the end.

“But I think the group is overall favorable. We managed to dodge the worst of the worst.”

16 teams from each continent that qualified for the Olympics were drawn into four groups. The Korean U-23 national team was picked for Group C along with Mexico, Fiji and Germany.

The Taeguk Warriors face Fiji first on August 4 at Fonte Nova Arena in Salvador and will take on Germany three days later at the same venue. The match against Mexico on August 10 at Mane Garrincha Stadium in Brasilia will be the last of the preliminary stage game for the Koreans.

“Against Fiji, Korea as well as Germany and Mexico are likely to come out with a win. We need to focus on the game against Germany,” added the 45-year-old manager.

Shin said he went to Germany to watch some Bundesliga matches and observe some of the players who were likely to play in the Olympics. “Germany is a favorite to win the summer games along with Brazil and Argentina,” he said. “Their youth football system is well organized. The younger German players are brilliant.”

When asked about Mexico, Shin was confident. “Korea went head-to-head with Mexican teams in World Cups as well as in Olympics often. Personally, I think we have a decent chance against them. As long as we play our game and are not taken aback by their style, we can take them.”

Looking beyond the group stages, Shin hopes to be in a position to avoid playing Argentina, one of the favorites to win the tournament.

“Argentina and Portugal are likely to contend for the top position in Group D,” said Shin. “If we advance to the knockout stage as the first in our group with two wins and one draw, then we should be able to bypass playing Argentina in the quarterfinals.”

This means if South Korea finishes top in the Group C and Argentina tops Group D, then South Korea will not meet the South American team in the quarterfinals.

The role of wild cards will be vital for Korea to succeed in the Olympics. Wild card players are those who are older than 23 but join the Olympics team under special invitation.

One of the wild cards that is expected to make an appearance at the Games is Son Heung-min of the Tottenham Hotspur in the English Premier League. Son joined the English team in 2015.

Son, a striker for the Spurs, initially saw a decent amount of playing time, scoring six goals during his 36 appearances last year. However, he has been on the bench a lot this year, and has only brought on during the injury time in the past several matches.

“Not only our wild cards but also other players on the U-23 national team are struggling to find any playing time on their clubs,” said Shin. “But Son is a brilliant player and we expect that once he joins the Olympics team, his play will come alive.”

On the two remaining wild cards, the manager said, “I have some candidates in mind but it is not something I can decide on my own. I need to confer with national team manager Uli Stielike and Lee Yong-soo, the chief of the Korea Football Association’s technical committee.”

Shin added, “I went to watch Hong Jeong-ho play at Augsburg but he only played for seven minutes,” said Shin. Hong who is thought to be one of the candidates to be selected as a wild card. “I dined with Hong, Koo Ja-cheol and Ji Dong-won. Hong said he will play his best if he joins our team.”?