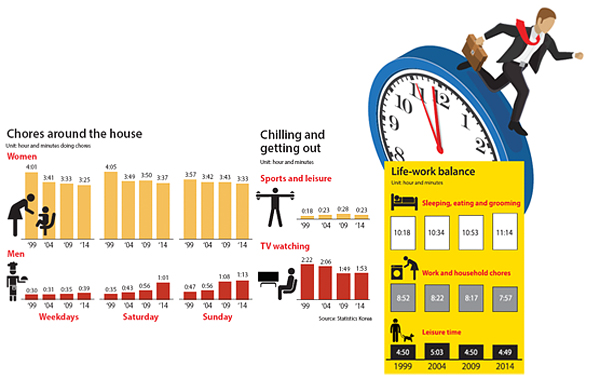 Koreans spent more than 11 hours a day eating, sleeping and taking care of their bodies, a sharp increase from 10 hours and 18 minutes in 1999, according to a Statistics Korea report released on Wednesday.

“Sleeping decreased by 12 minutes but the time people use to take care of themselves increased by 20 minutes during the period,” said Yoon Yeon-ok, a director at Statistics Korea.

Daily free time for Koreans aged 10 and over was 4 hours and 49 minutes in 2014, the shortest since 1999, when the agency started to compile the data.

Furthermore, the time they spent with friends or other persons dropped from 51 minutes a day in 1999 to 43 minutes in 2014. This suggests that Koreans are more comfortable spending free time by themselves.

The survey didn’t ask about smartphone use.

“The average amount of time people used to do sports and leisure activities increased, while watching television and meeting other people decreased,” Yoon said.

Average Koreans watched TV for 1 hour and 53 minutes on weekdays and 2 hours and 51 minutes on Sunday.

The Statistics Korea report shows that fewer people are reading books. The percentage of people reading books for more than 10 minutes on Saturdays dropped from 13.1 percent in 1999 to 10.2 percent in 2014.

People are also spending less time attending school and working their jobs. In 1999, those activities took up 8 hours and 52 minutes of a weekday, which dropped to 7 hours and 57 minutes in 2014.

But the amount of time needed for housework didn’t change much from 15 years ago. It’s still an hour and 55 minutes a day for all Koreans, male and female.

Males spent only 39 minutes a day doing housework during the week and 61 minutes on weekends.

By generation, people born between 1979 and 1992 spent more time sleeping or taking care of themselves compared to baby boomers, or those who were born between 1955 to 1963.