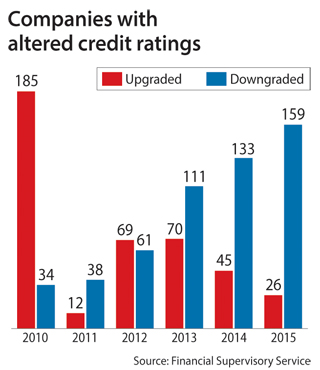 The number of Korean businesses that suffered credit rating downgrades last year was the largest since the 1998 Asian financial crisis.

The annual totals of companies with downgraded credit ratings have been increasing since 2010.

Even companies with the highest ratings have been affected. Last year, companies that maintained triple-A status shrank from 96.8 percent of all companies in that category in 2014 to 90.4 percent, while those with A ratings retreated from 85.6 percent to 78.1 percent.

“Most of the companies in industries that are struggling the most, including construction, refineries, chemicals and steel, saw their credit ratings drop,” an FSS official said.

As of last year, there were 1,114 companies with credit ratings, which was a drop of 35 companies, or 3 percent, from the previous year. Although the number of companies with ratings on their bonds has been increasing since 2004 - when the number was 699 - last year, it dropped, as fewer companies issued corporate bonds. Last year, companies issued a total of 40.9 trillion won ($36 billion) in corporate bonds, a 3.3 percent drop from the previous year’s 42.3 trillion won.

Among the bonds issued, those with ratings of AA or above accounted for 77.9 percent, followed by those in the A grade with 18.7 percent. Those with grades of BBB or lower only accounted for 3.4 percent of bonds that were issued last year.

No companies with ratings of BBB or higher filed for bankruptcy, which is an improvement from the 0.39 percent recorded in 2014. As a result, the overall bankruptcy rate of companies remained unchanged at 0.87 percent.