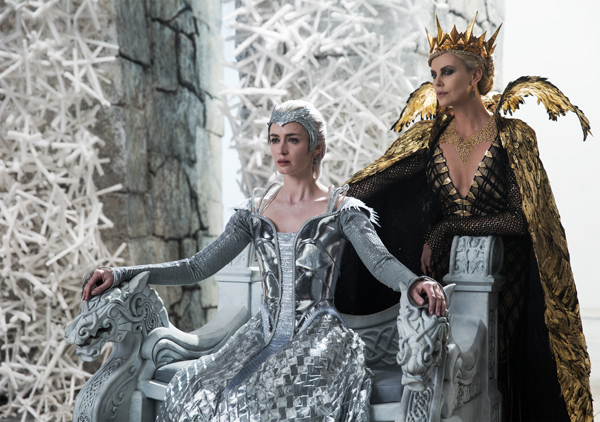 Emily Blunt, left, and Charlize Theron appear in a scene from “Huntsman: Winter’s War.” The movie was released in Korea on April 13.

“The Huntsman: Winter’s War” is one of the more bizarre sequels in recent memory. If modern movies are going to strip every side story out of every superhero universe and beyond, fairy tales should be fair game, too. But, it’s more than a little odd that the filmmakers here decided to follow up their feminist reimagining of the Snow White story with one focused on Eric the Huntsman (Chris Hemsworth) and the jilted, hysterical woman (Emily Blunt’s Freya) who is trying to keep him apart from his true love (Jessica Chastain’s Sara). If this is progress, count me out.

Part prequel, part sequel to “Snow White and the Huntsman,” this one plays musical chairs with focus and tone. One moment, it’s a bawdy, slapstick comedy. The next, it’s a deathly serious fantasy epic. Tonal shifts are fine, but this nonsense feels like it was put together by a committee of robots who were given copies of “Frozen,” “Game of Thrones,” “The Chronicles of Narnia,” and five minutes of “Snow White and the Huntsman” as source material.

There are about a dozen competing story lines, the only point of which seems to be a futile effort to continually reinvent and justify its reason for being.

This film starts before the events of the first. The evil Ravenna (a luminous Charlize Theron) is alive, glowing, glaring and still talking about taking down men and kingdoms. She wants her good-natured sister Freya (Blunt) to fall in line too, but that only happens when Freya’s heart is broken and her icy powers are unleashed. So she retreats to a frozen enclave in the north (sound familiar?). If she can’t raise children, she’ll raise an army from childhood ... and also ban them from experiencing love.

But two of those child soldiers, Sara and Eric, grow into handsome adults and, well, fall in love - or so we’re told. Chastain and Hemsworth are fine on their own, but together their chemistry fizzles. Hemsworth, in particular, can’t seem to get out of Thor mode. He can do the high-wattage smile and the goofy aside just fine. The gaze of desperate love and longing? Not in his arsenal.

Freya is of course none too happy about Sara and Eric’s romance and schemes to keep them apart. The story jumps ahead seven years, after Snow White has defeated Ravenna. The pesky golden mirror has driven Snow mad, and essentially becomes The One Ring that everyone wants. Eric, who has picked up some comic relief little people along the way, is out to get it before Freya does.

Confused yet? There are so many twists and turns that it’s hard to know what exactly is an actual spoiler and who exactly might care. In fact, it’s hard to know who this movie is for at all. It’s both too adult for kids and too cartoony for the “Game of Thrones” crowd.

Colleen Atwood’s costumes still look like a dream, but gone are the sweeping landscapes and gothic beauty of Rupert Sanders’ film. For such a bombastic title, “Winter’s War,” the feature debut of visual effects specialist Cedric Nicolas-Troyan, feels awfully small compared to its predecessor. The budget seems to have been wasted on its stars who aren’t even together all that much. When they are, it’s to execute action sequences.

There is a decent movie buried in here somewhere, but with such powerhouse actresses it’s dismaying that it feels so regressive from the first. Snow White had some agency. Here the ladies are props and stereotypes and always one heartbreak away from madness.

It makes you wonder why, in the name of the Brothers Grimm, anyone would have put this purportedly female-centric story in the hands a co-screenwriter best known for “The Hangover” sequels.
AP