Explore these romantic backdrops in Seoul

Explore these romantic backdrops in Seoul 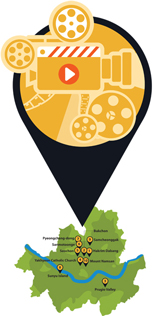 The city of Seoul is more romantic than it’s given credit for. Narrow alleys between the skyscrapers and small but quaint buildings and restaurants that few people know of can be found in all corners of the city.

These photogenic places have played major roles in making movies and dramas more beautiful and romantic than they would have been otherwise. The Joongang Ilbo has created a list of places that have been used as filming sites, some of which may seem familiar to movie aficionados and may motivate you to try something new for your next date.

In the movie “Bungee Jumping of Their Own” (2000), In-woo (Lee Byung-hun) asks the DJ to play “When I Fall in Love” for Tae-hee (Lee Eun-ju), who is sitting next to him. In response, Tae-hee hands him a lighter with a drawing of her face on it. The lovely scene was shot in Hakrim Dabang in Daehangno, central Seoul.

The Korean title of the movie “The Day He Arrives” (2011) is “Bukchon-Bound.” Bukchon is a village filled with hanok (traditional houses) in central Seoul, where Seong-jun (Yu Jun-sang) comes to find his friend Young-ho (Kim Sang-joong).

As the title suggests, major events of the film take place in Bukchon: the alleyway in which Seong-jun kissed Ye-jeon in the freezing cold and another alleyway where he took a photo with a fan. The characters also drank at a bar called Novel in Gahoe-dong.

With its unique exterior, the building has long been the landmark of Gangnam District. Its beautiful nighttime lighting adds to its appeal. On third floor of Prugio Valley, there is a cafe, gallery and theaters. The building is closed on Sundays.

The Yakhyeon Catholic Church in Jung District, central Seoul, was the first Western-style Catholic church built in Korea. This is also where Ma-joon (Juwon), a step brother of Tak-goo married Yu-kyung (Yu-jin) in spite of their families’ opposition in the drama,“The King of Baking: Kim Tak-goo” (2010). The church was restored in 2000 after a fire in 1998.

The church has neither flamboyant decoration nor imposing size. However, the simple design and red brick construction creates a formal ambience. The church is open to the public except during Mass.

An elderly milkman, Man-suk (Lee Soon-jae), encounters an elderly woman, Yi-pun (Yoon So-jung), who makes a living selling trash. The grumpy old man falls in love with the woman with a warm smile. Seochon in Jongno District is where their love develops in the movie “Late Blossom” (2011).

The scene where the two walk through a narrow alley while having a conversation was shot in the alley between the Seoul Church in Ogin-dong and Singyo-dong. A street corner where Man-suk waits anxiously for Yi-pun anxiously is also in Singyo-dong.

Appearing as the house of Choi Han-sung (Lee Sun-Kyun), brother of the main character, Choi Han-gyeol (Gong Yoo), in the drama “Coffee Prince” (2007), is Sanmotoonge cafe in Buam-dong, northern Seoul. Inside the cafe many reminders of the sensational drama remain. A doorplate bearing the name Choi Han-sung, scripts, and the drum played by Ko Eun-chan (Yoon Eun-hye) are all reminders of the drama’s heyday.

Located on a hill, the place offers a commanding view of the area. A cup of coffee is best enjoyed sitting outside. 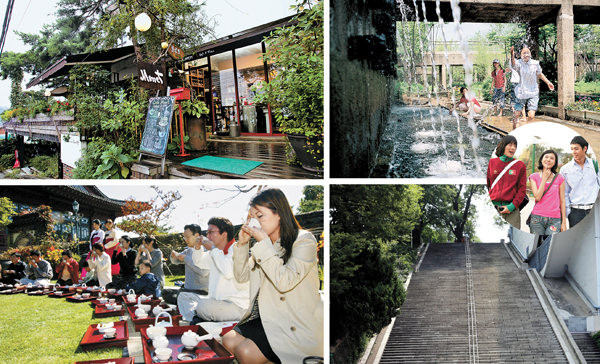 Featured as the house of top celebrity Dok Go-jin (Cha Seung-won) in the drama “Greatest Love” (2011) is a museum in Pyeongchang-dong, Jongno District. The interior and exterior design of the Kim Chong-yung Museum are very sophisticated.

The cafe, Pluto, operated by Dok’s female counterpart, Gu Ae-jung (Kong Hyo-jin), is the nearby Cafe Monet. Vestiges of the drama can be found here, including the doorplate from the cafe’s days as Pluto. The mural painting of the bob-haired woman in the drama is still there, too. Both venues can be found near the famous Gana Art Center in Pyeongchang-dong.

In the romance flick “Almost Love” (2006), Ji-hwan (Kwon Sang-woo), Dal-rae (Kim Ha-neul) and Young-hoon (Lee Sang-woo) visit Sunyu Island near Yeongdeungpo District in western Seoul. The three race through the park for the prize of a can of beer.

The park was created at an old sewage treatment facility on Sunyu Island. After closing the plant, the park opened in 2004. In the movie, the characters run past a wooden bridge and viaduct. Photographers often visit the island due to its variety of settings.

This elegant hanok is currently used as a cultural complex, frequently holding events showcasing traditional culture. The quiet and relaxing ambience Samcheonggak features a well-maintained garden, a Korean restaurant and a cafe. It is located next to Samcheong Tunnel.

Many scenes from the drama “My Name Is Kim Sam Soon” (2005) were shot at Mount Namsan. To relieve her stress, Sam-soon (Kim Sun-a) takes the cable car and enjoys the view of Seoul from the observatory. But the most impactful scene of all was the kiss between Sam-soon and her male counterpart, Jin-hun (Hyun-bin), on the stairs. The two play rock-paper-scissors while climbing the stairs and eventually kiss, making the site a must-see spot for drama fans.

Thanks to the drama, the stairs were named Sam-soon Stairs. They are located next to the Seoul Education Research and Information Institute in Jung District.