Over the last two years, there were seven large bids for the acquisition of Korean financial firms, and Chinese financial titans participated in all seven deals.

In particular, Beijing-based Anbang Insurance Group, one of the largest comprehensive insurance groups in China, has been making headlines in Korea with several attempts to make an acquisition.

Earlier this month, Anbang announced that it was buying the Korean operations of Germany’s Allianz Life Insurance.

It is its second acquisition after taking over Tongyang Life Insurance, an affiliate of the troubled Tongyang Group in February 2015.

The most recent news actually troubled market watchers. The Chinese behemoth, famed for its deep-pocketed purchases around the world, snatched up the German insurer for the rock-bottom price of $3 million, a mere 1 percent of the 300 billion won ($260 million) price local investors expected.

With the acquisition of Tongyang and Allianz, Anbang has become the fifth-largest insurer in the Korean market.

More Chinese acquisitions are possible, as several companies are up for sale due to low interest rates and new financial soundness standards coming into force in 2020. They include the Korean offices of Dutch ING Life and British PCA Life Insurance, as well as homegrown KDB Life Insurance.

The local private equity fund MBK Partners, which acquired ING Life’s Korean operations three years ago, has been searching for bidders with Morgan Stanley’s Seoul office. There has allegedly been interest from China.

Having an aggressive Chinese player like Anbang in the market is stirring concerns largely because of the murky ownership of the company.

Anbang, led by Chairman Wu Xiaohui, is known to be owned jointly by state-owned industrial firms including Shanghai Automotive Industry and China Petroleum & Chemical, and small lesser-known companies across China, according to a report by The Wall Street Journal.

The Chinese company refused to comment on the details of its shareholders.

Since the Korean financial market is small, infusion of capital from a company with such complex ownership might increase potential risks, analysts say.

“Anbang has no clear governance structure as far as we know, since it is not a listed company,” said Jeon Byeong-seo, director of the Chinese Economic and Finance Research Institute of WiseFn, a financial information provider. “There are rumors that Anbang’s chairman is related to Deng Xiaoping, and that the company is being targeted in the Chinese government’s anticorruption campaign. Considering its recent growth, there is an invisible hand that we cannot identify.”

Anbang made attempts to buy a controlling stake in Woori Bank in 2014. 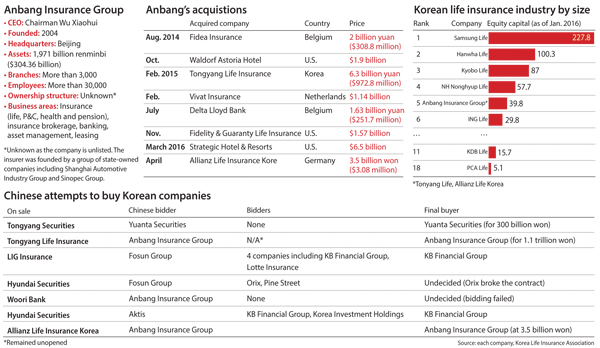 Korea’s securities industry is also worried about the infusion of Chinese money. A number of brokerages are undergoing restructuring.

In late March, Aktis, a Hong Kong-based private equity fund, became a fresh Chinese player in the Korean securities market, when it attempted to purchase Hyundai Securities, the sixth-largest brokerage. It tried to take over the Korean firm for more than 1 trillion won, but lost the bid to KB Financial Group. Aktis, however, was rumored to have proposed a higher price than KB.

“It is true there are risks if Chinese firms that want to buy Korean firms have dubious governance structures,” said Ji Man-soo, a researcher at the Korea Institute of Finance. “But we don’t know yet how those risks are going to turn out, so it is not desirable to view those companies negatively.”

Taiwan-based Yuanta Securities’ acquisition of Tongyang Securities is considered a successful case in the market.

“Because Korean asset management firms and securities firms have the ultimate goal of expanding into the Chinese market, M&As with Chinese financial firms may increase the chances of succeeding in that,” Ji said.

Korea isn’t the only target of Chinese companies wanting to go global. Anbang has been scooping up financial firms, hotels and other properties in the United States, Europe and other Asian countries.

Korea is small, but it is considered highly lucrative, analysts point out.

“Because there are financial products offering around 8 percent interest in the country,” Jeon said, “Chinese firms definitely make profits from operating funds from Korea.

“Since about 90 percent of the Chinese financial industry is run by the banking sector, they are more interested in expanding into insurance, securities and asset management companies,” he added.

Due to such global projects like the One Belt, One Road initiative, China is seeking more global investments, according to Song Jin, an analyst at Yuanta Securities Shanghai Research Center.

“Global M&As of Chinese companies will be a long-term trend,” the researcher said. “Chinese companies seek the technology, branding and market share of target companies, and also the profitability and asset allocation.”

Because of the yuan’s depreciation, offshore investments are a good way for Chinese companies to hedge currency-related risks.

“Since Korea has become an important trading partner and is one of the key strategic partners of China in Northeast Asia, we believe some of the M&As taking place in Korea might also be policy-driven and will play an important role in cooperation between the two countries,” Song of Yuanta said.

There are positive aspects of the inflow of Chinese money.

“It can be easier for Korean banks to make inroads into the Chinese market, and vice versa for Chinese banks,” said Lee Jeong-jin, a researcher at KB Financial Research Institute. “And by increasing the use of the yuan and won, both countries can help encourage the use of their currencies in international markets.

“The entry of more Chinese financial players might also help other Chinese businesses list on the Korean stock market.”

Many people are starting to view M&As with Chinese companies as a good opportunity.

“There are growing voices in the financial sector that we need to learn ‘China,’” said Yang Gap-yeol, a spokesman for Yuanta Securities.

The Korean branch of the Taiwanese securities business recently offered its employees 10 sessions of China-related lectures.

“We have set a goal of being a bridge for small and midsize Korean firms to make investments in China,” he said. “Korean firms can take the opportunity of M&As with Chinese companies by making themselves larger.”