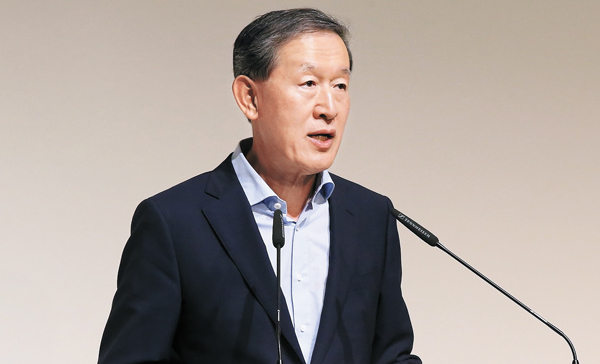 Huh Chang-soo, chairman of GS, discusses the company’s strategy during an executive meeting at the headquarters of GS Group on Wednesday. [GS GROUP]

Go grandmaster Lee Se-dol’s efforts against Alphago are a good example of the persistence required at GS Group, the chairman Huh Chang -soo said on Wednesday.

Speaking during the second quarter executive meeting, Huh told 150 GS executives that Lee’s determination to overcome the AI algorithm was a good example of the type of problem-solving required at the company.

“Although Lee should compete with artificial intelligence algorithm Alphago, he navigated challenges by constantly analyzing the mechanism of Alphago ,” Huh said, “That conveys meaningful messages to the industry.”

Still, the chairman noted that the slowing economy will pose threats to the industry.

“The global economy is suffering from a downturn and there is growing volatility in oil prices, foreign exchanges and other major economic indicators,” he said.

The chairman also expressed his expectation of an incubator center run by the group in Yeosu, South Jeolla.

GS Group joined the government’s creative economy initiative last June to focus on developing the coastal city as a center of biochemicals and food. “Even though it has been less than one year since the opening, there is tangible achievement,” he said.

As used startup MarineTechno, that produces cosmetic products based on natural collagen extracted fisheries, as an example.

South Jeolla traditionally has been the nation’s prime region for agriculture and fisheries.

The startup struck a deal worth $560,000 during President Park Geun-hye’s visit to the United States and South America.

“The result was made possible through great entrepreneurship by the startup and the support by the center,” the chairman said.

“We will keep making efforts to produce such success stories and contribute to creating jobs.”

The South Jeolla Creative Innovation Center is the 12th of 17 planned under Park’s creative economy initiative, the administration’s attempt to encourage growth of tech-focused entrepreneurship.