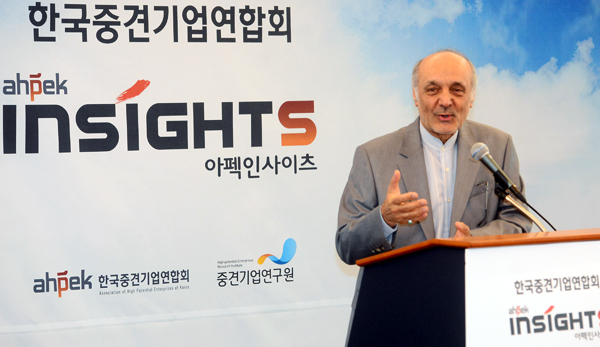 Iranian ambassador to Korea Hassan Taherian speaking at a forum for medium-sized companies held at Lotte Hotel in downtown Seoul on Wednesday. After sanctions have been lifted, the number of Korean companies interested in expanding into Teheran has grown. [NEWSIS]

Around 85 heads of medium-sized companies gathered at Lotte Hotel in Sogong-dong, central Seoul, at around 7 a.m. on Wednesday to learn about potential opportunities in Iran, a newly opened market following the lifting of sanctions tied to its nuclear ambitions.

Developing a joint venture is an ideal way to enter the Iranian market, suggested Hassan Taherian, Iran’s ambassador to Korea, during his speech.

“We [the Iranian Embassy] will cooperate to help tackle challenges associated with entering Iran,” the ambassador said, “and we will also help [Korean companies] find credible partners in forming a joint venture.”

He spoke at the meeting dubbed Ahpek INSIGHTS hosted by Association of High Potential Enterprises of Korea (Ahpek), a group that represents medium-sized businesses.

“I expect that Korean companies, with their high-level expertise and willingness to enter overseas markets, will become a leading partner with Iranian enterprises,” Taherian said.

Major Korean companies have high expectations for the opening of the Iranian market as Iran is considered particularly lucrative in construction and other heavy industries.

The ambassador said that related government bodies have introduced a law aimed at protecting investors. He also added that government agencies are open to providing guarantees depending on the businesses and deal.

Until Korea joined the international community in sanctioning Iran, it was the sixth-largest market for Korean builders.

The head of association said that Iran will present great opportunities for Korea’s smaller companies.

“The opening will also provide commercial momentum between the two parties,” he said, “We will cooperate with the National Assembly and the government to accelerate medium companies’ entry into Iran.

“Thanks to the lifting of sanctions in 37 years, I am delighted to find ways to have more improved business ties with Iran.”