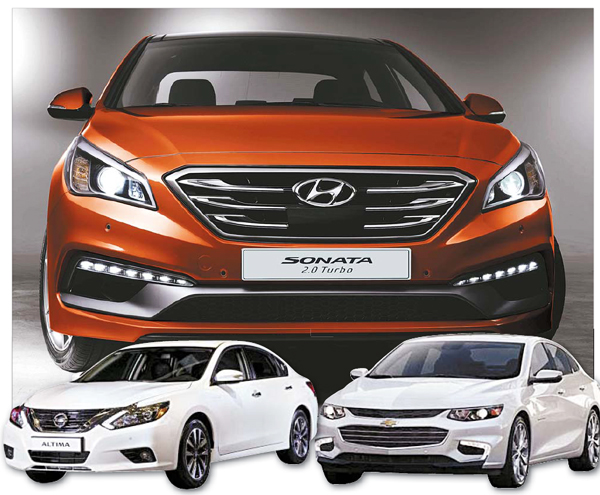 Top: Hyundai Motor’s Sonata 2017 model that was available from Wednesday. Bottom left Nissan’s latest Altima that went on sale on Tuesday and, right, the Chevrolet’s Malibu that is scheduled to be unveiled later this month. [JOONGANG ILBO]

Hyundai Motor on Wednesday began selling its 2017 Sonata midsize sedan months ahead of schedule to catch up with rival companies who have already released their flagship vehicles.

“We have moved up the sales date a couple of months ahead of our initial plans,” said a Hyundai Motor official. “Although we have reinforced safety related features we have kept the price almost the same as the 2016 model.”

Last month alone, the SM6 sold 6,751 units, which was close to the 7,053 sold during the same period. The figure for Sonata sales also includes the business-class 611 YF Sonata.

“We plan to keep Sonata sales, which registered more than 100,000 units a year, from being lost to competition from here on,” said the Hyundai Motor official.

The Korean automaker has focused more on the safety feature as well as its appeal to a younger audience on the upgraded Sonata.

A safety unlock feature has been installed in all models, which only opens the driver’s door while keeping the other doors locked. The feature is intended to protect female drivers, in particular, who have been the victim of thieves who have climbed into the vehicle, in places like parking lots, through the passenger door or rear doors once all the doors are automatically unlocked at the same time.

As well as “advanced” airbags, the company said it is targeting younger consumers by offering a sports package that comes with an 18-inch sports wheel and dual exhaust mufflers.

“We lowered the price on the most basic model to 29.9 million won by boldly getting rid of options like sun roof and navigation systems where there are strong difference in preferences among customers,” said Nissan Korea CEO Takehiko Kikuchi. “However, we did not compromise on safety or performance.”

The latest Altima, which is the fifth upgrade since it was first released in 2012, has been given a facelift where only several parts of the vehicle has been changed rather than a full makeover.

The sedan has changes to its front and rear designs as well as its interior and performance. The main model the company is pushing is retailed at 32.9 million won. This model is equipped with a 2,488-liter engine that can bring up to a maximum 180 horsepower with maximum torque of 24.5 kilogram-force meter. Its fuel economy is 13.3 kilometers per liter.

Amada Masahide chief product specialist, who was in Seoul participating in the launch of the new Altima, said all car brands place great importance on the midsize sedan market.

“The very existence of the brand is threatened when a company loses its market in the midsize sedan,” Masahide said. “The sophisticated designs and the explosive performance of the Altima will surely appeal to the Korean consumers with high taste.”

Chevrolet is also joining the sedan competition with its Malibu, which has been a steady seller in the global market with accumulated sales exceeding 10 million units. However, sales in the Korean market has been falling sharply as the model that is sold here is the eight generation that made its debut in 2011. The company is planning to introduce the ninth generation later this month. This model sold more than 20,000 units last month in the U.S.

The U.S. automaker is already hyping the Malibu ahead of its official release in the Korean market.

The event is scheduled to take place at the country’s first domed baseball stadium, Gocheok Sky Dome in Guro District in Seoul. Additionally, the company is also planning a top customer party celebrating the sales launch of the ninth generation Malibu at COEX in Gangnam southern Seoul next month.

Hyundai Motor’s little brother Kia Motors is finishing up its product improvement program on its popular K5 midsize sedan within the first half of this year. This program includes analyzing customers’ preference while reducing unnecessary options and converting popular options to be basic installments.

Up until last month K5 has seen exceptional popularity selling 11,728 units in the first three months of this year, enjoying a growth rate of 30.6 percent from a year earlier.

Renault plans to continue its current marketing centered on the SM6. Reservation on the popular midsize sedan have already exceeded 10,000 units.

While SM6 sales have grown considerably, the automaker’s other midsize sedan, the SM5, has not been as popular. Sales of the vehicle dropped 33.5 percent last month compared to the previous month, only selling 867 units.