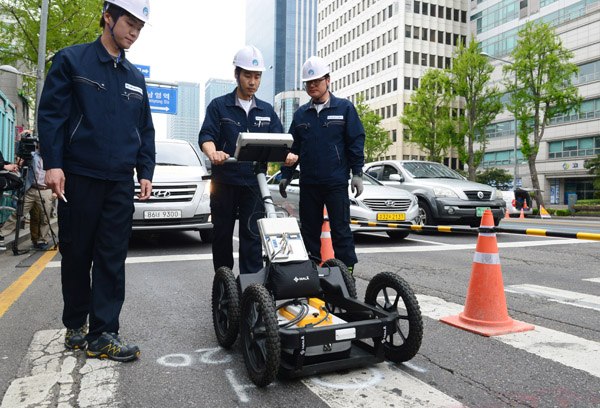 Workers use a ground-penetrating radar device to look for hollow spaces in Hangang-daero in Yongsan District, central Seoul on Wednesday. [NEWSIS]

At least 105 sinkholes were found in Seoul’s main roads including Hangang-daero, Yeongdong-daero and Songpa-daero, the Seoul Metropolitan Government announced on Wednesday.

Sinkholes can form when rain washes away underlying the soil, causing the ground surface to collapse. There were 56 such cases last year in Seoul.

The city government will conduct road repairs according to descending emergency levels.

There are 62 sinkholes that qualify as Level A, the most serious type, in which the thickness of the ground above the hollow space is less than 30 centimeters (11 inches). The government plans to repair these sites within the month.