‘Deadriano’ kills it for Seoul

‘Deadriano’ kills it for Seoul 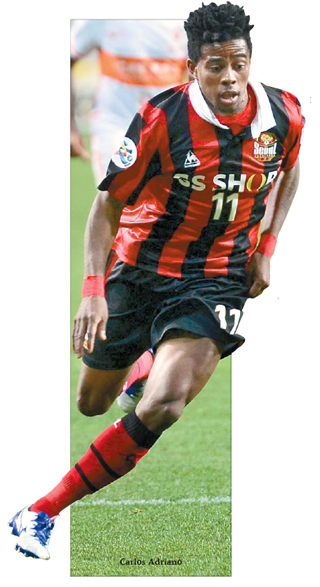 What would FC Seoul’s offense be were it not for Carlos Adriano and Dejan Damjanovic?

Brazilian striker Adriano was named top scorer in K-League Challenge in 2014 when he played for Daejeon Citizen. Montenegrin Damjanovic played for Seoul from 2008 to 2013 to become the top scorer in the K-League Classic for three consecutive seasons, from 2011 to 2013. Damjanovic briefly left the K-League altogether to play in China, but returned to his old team in December of last year. Adriano joined in July.

Seoul is Adriano’s second K-League team after Daejeon, for which he scored 27 goals in 32 games.

“Damjanovic is very energetic on the pitch, finding the empty space to create offensive chance, and Adriano has the ability to finish the shots,” said Seoul manager Choi Yong-soo. “Their combination is simply the best.”

Indeed, after spending only three months together, they have formed one of the most lethal duos in the league.

Their combined effort has been brilliant this year. During the Asian Champions League (ACL) group stage match against Buriram United of Thailand on Wednesday, Damjanovic scored an opening goal in the 24th minute to grant the Seoul team an early lead, while Adriano ran around the field the entirety of the match, constantly attacking Buriram’s side of the pitch. Seoul’s Park Yong-woo added another goal in the 43rd minute. Seoul eventually came out with a 2-1 win and secured its spot for the Round of 16 as the top of Group F.

While the Montenegrin forward has had three goals and two assists this year during the ACL, Adriano has had nine goals.

Their combined success has been the driver behind Seoul’s power in the ACL, whose spot in the next round of the competition has been decided even though the group stage is still ongoing.

The teamwork by the two is also bringing great results in the K-League Classic. In the sixth round of K-League Classic matches against Suwon FC on April 16 in Seoul World Cup Stadium, each collected a goal to lift Seoul over Suwon 3-0.

Thanks to their efforts, Seoul is on five-game winning streak and is currently ranked at the top of the league standings with five wins and one loss.

In the eleven games that Seoul has played this year, including five ACL matches, Adriano and Damjanovic aggregated 19 goals out of the team’s 29 total goals - Adriano with 14 and Damjanovic with five.

JoongAng Ilbo met with both players recently to discuss their successes, and what they hope to accomplish this season. 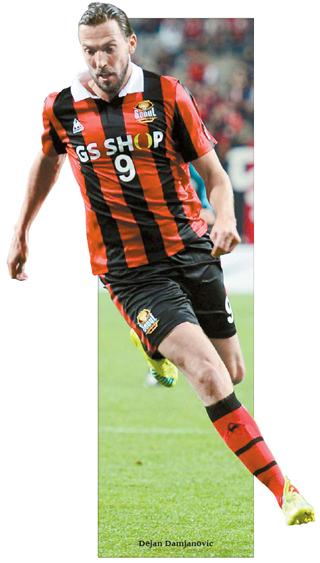 Q. Fans call you two “Deadriano.” What do you think about this nickname and how is the teamwork between you two?

A. Adriano: I notice the word “dead” in the front. It’s as if we are some type of weapon.

Damjanovic: I think the nickname came to be because of how far we’ve gotten in such a short period of time in terms of our teamwork. We do have some problems with talking to each other since although I can speak English, Adriano can only speak Portuguese. But we usually know what the other’s trying to say by just looking at each other.

Adriano: We do not need to talk a lot. I think it’s enough that two footballers can play well together. On the side note, I think Damjanovic has a great personality and I feel like I have a lot to learn from him.

In what ways do you guys work well together?

Adriano: Both of us are scorers, so we can anticipate each others’ moves. Also, Damjanovic is an experienced player. The first game this year gave me the hunch that we will be able to work well together. I am grateful that Damjanovic has my back.

Damjanovic: Adriano’s fast. I think he is one of the top players in Asia when it comes to speed. When I poke the ball from the side into the empty space in the middle, Aridano’s there before I know it. I have somewhat altered my playing style for the team and for Adriano.

It looks like the competition between you two for a title will be fierce. What are your goals this season?

Damjanovic: I think we could combine 40 goals total this season. We would win the K-League title this year if we combined about 50 goals.

Adriano: Honestly, I didn’t think I would score this many goals. But I think it goes without saying that we got to score as many goals as possible to win. If we continue to score like this, we could compete for the top scorer title.

Damjanovic: I came to assume more of an assisting role playing together with Adriano. But I think the chance to score goals will present itself to me later in the season. I am a slow starter. I think Adriano might score about 20 goals in the ACL, but I would like to take a shot at the K-League top scorer title. Of course, our ultimate goal is to win the K-League.

There are some fans who wait for the formation of trio among you two and Park Chu-young, who’s recovering from the foot injury. What do you think?

Adriano: Park’s a great striker who changes the tempo of the game as soon as he steps into the pitch.

Damjanovic: I think Park will be able to play more with us during this coming summer. The team can always count on him when in a pinch. We ourselves cannot wait to see the trio in the field.