Despite the rumors, KCC Egis will stay in Jeonju after all

Despite the rumors, KCC Egis will stay in Jeonju after all 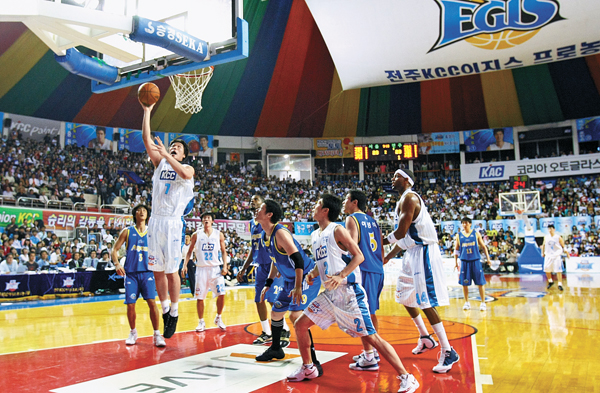 Despite the rumor and concerns by the fans, Jeonju KCC Egis have decided the team will stay put in the city of Jeonju. [JOONGANG PHOTO]

Even though the Jeonju KCC Egis had been looking into the possibility of relocating the franchise to Suwon, the Korean Basketball League (KBL) team has decided as of Thursday to remain in Jeonju.

With almost all major sports having a team settled in Suwon - the KT Wiz in baseball, Suwon Samsung Bluewings and Suwon FC in football and Kepco Vixtorm in volleyball - the city was hoping to round out the list with a basketball team.

“The city of Suwon did express its hope to bring in the Egis into its city,” said a staffer from the Egis. “However, the final decision by the club is to stay in Jeonju.”

Rumors about the Egis’s relocation have been around for some time, and although the rumors were never confirmed until now, the possibility still haunted Egis fans living in Jeonju.

As the most recent wave of rumors began to build, Suwon Mayor Yeom Tae-young said in an April 3 interview with the JoongAng Ilbo that he has no intention of bringing in a team that is already well-settled in a different city.

That did little to quiet anxious Jeonju residents, and with the rumors continuing to spread, Yeom further clarified via his Twitter on April 12, “There have been no discussions about the relocation of the Egis.”

But the fears of Egis fans in Jeonju were well-founded. Of all professional sports in Korea, basketball teams are the most migratory. Since the league’s establishment in 1997, the only teams that remain in their original cities are the Wonju Dongbu Promy, Changwon LG Sakers and Anyang KGC.

The Egis was originally Daejeon’s team until it moved to Jeonju in 2001. Although the Egis abandoned Daejeon, the team’s popularity refused to dial down. In fact, Egis games are the third-most attended of all 10 teams in the league. This season alone, over 100,000 fans visited the Jeonju Gymnasium

Towards the end of the season and during the playoffs, not only was the venue completely packed, but the team also had to put out 300 more chairs to accommodate an overflow of fans.

But it wasn’t the enthusiastic and loyal fans that made the team consider a relocation - it was its dilapidated arena and the city’s disinterest in doing anything about it.

Jeonju Gymnasium was first erected over 40 years ago, in 1973, and many have said the worn-out facility has serious safety issues. Although Jeonju proposed various measures to fix things, it was unable to go through with them due to budget issues.

In comparison, Suwon said the team could use Chilbo Gymnasium, built in February. This was tempting for the team’s sponsor, KCC, who was particularly worried about safety. Further, Suwon is the city where Kumkang Korea Chemicals Co., the predecessor of KCC Corporation, first started its business. The team’s training facility is also located in nearby Yongin

But in response to the relocation rumors, Kim Seung-su, the mayor of Jeonju, promised the Egis and the KBL that the city would push ahead with construction of a new stadium or a remodel of its current one, putting an end to the possibility of relocation.

“The main drivers behind the relocation were the issues with the arena and possible safety problems that could threaten the wellbeing of fans,” said an Egis staffer. “But Mayor Kim showed his strong will to handle the problem. The team has always been grateful for the support given by the fans in Jeonju and as long as the problem with the gym is resolved, the Egis has no intention or reason to leave.”