Players keep their fans waiting for that last-minute clincher

Players keep their fans waiting for that last-minute clincher 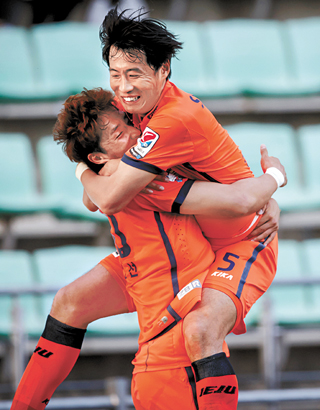 Jeju United Lee Kwang-sun, left, celebrates with his teammate Gwon Han-jin, right, after scoring in the 88th minute during a match against Ulsan United FC. Jeju’s goal on April 17 is one of many last-minute goals in the K-League Classic this season. [K-LEAGUE]

“It ain’t over till it’s over,” said New York Yankees’ hall of famer Yogi Berra. Not only is this true in baseball, but the same can be said for football, where the game can turn and change in a moment.

This seems to be what’s going on in the K-League Classic these days, where the results of the games have been changing dramatically in the closing minutes of the match.

Since it began on March 12, the K-League Classic has seen 93 goals in 36 games over the past seven weeks, which is considerably more than last year during the same period, where there were only 82 goals.

The change in the rule on how the teams are ranked this season has much to do with the current phenomenon. During last season, the Korea Football Association (KFA) took the goal difference into consideration in determining the ranking when teams were tied. However, starting this year, the KFA decided to implement a new regulation that a team with more goals would claim a higher rank in case of a tie. The intention behind the rule change was to induce clubs to play more offensive football and ultimately increase the level of fan satisfaction.

And it looks like the change is working. One of the most compelling and entertaining scenes this season is the last-minute goal.

What’s more intriguing about these goals is that they are often crucial game-changers.

Ten games until now saw last-minute goals changing the fate of clubs in the league.

The trend seemed to start with the game between Pohang Steelers and Gwangju FC during the first round. Gwangju was in the lead by 2-0 after Jung Jo-gook scored two in the 16th minute and 65th minute. However, Pohang piled in three goals from the 87th minute to the 92nd minute in injury time to steal the lead.

Pohang thought their last-minute goals were going to be game-winners. They were wrong. Six minutes after Pohang’s goal, Gwangju’s Kim Jeong-hyeon netted the life-saver for the club, scoring in the last minute of injury time to tie the match.

Another notable game where a last-minute goal flipped the outcome of the game was the game against Suwon FC and Gwangju in the third round. This time, Gwangju was the late victim. Gwangju took the lead early in the second half as Jung netted a goal in the 48th minute, and Suwon tied the game in the 82nd minute. But, Suwon’s comeback effort didn’t end there. One minute before the end of the game, in the 89th minute, Suwon’s midfielder Lee Sung-hyun scored the game winner to conclude the match at 2-1.

Incheon also has a player who seems to have a knack for scoring last-minute goals. Song Si-woo, who is in his debut season in the K-League, scored the equalizer against defending champion Jeonbuk Hyundai Motors on April 13 in the 90th minute. He repeated the late-scoring play in the game against Suwon Samsung Bluewings by hitting the net in the 96th minute during injury time. Incheon came out with 1-1 draws in both games, thanks to Song.

“It is the power of mind over body at the center of the great plays such as last-minute goals,” said Kim Do-hoon, the manager for Incheon, after Song’s goals. “It is all because the players put in their best effort and didn’t give up. It is truly a testament to the tenacity of our players.”

The latest game-changing last-minute goal came during the sixth round match between Jeju United FC and Ulsan Hyundai FC on April 17. The teams were deadlocked for the entire match until Jeju’s Lee Kwang-sun broke the drought to score in the 88th minute. The goal was more invaluable as it came after Jeju’s forward Lee Keun-ho, who joined the team about a month ago, missed a penalty kick. Lee Gwang-sun’s goal put Jeju 1-0 over Ulsan.

While such dramatic games continue to grab the fans’ attention, it gives added hope for the K-League that has been waning in the past few seasons.