Prospects are grim for youth unemployment

Prospects are grim for youth unemployment 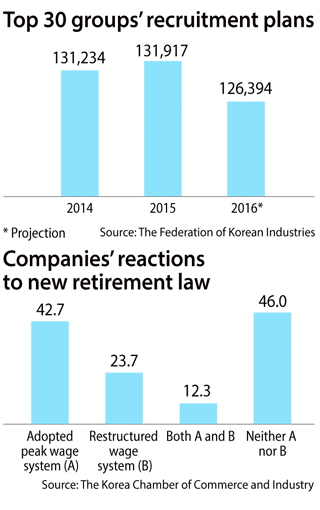 Korea’s youth unemployment rate, which was stuck in the double digits for the second month in a row in March, won’t improve soon as many leading companies are holding back on hiring this year.

In a survey released Thursday by the country’s biggest business lobbying group, the Federation of Korean Industries (FKI), 21 out of 30 major groups, including Samsung, Hyundai Motor and LG, plan to hire the same number or fewer people this year compared to the previous year.

“Sixteen groups plan to reduce the number, while only nine are thinking about hiring more this year,” said Chung Jo-won, an FKI team leader.

Korean companies’ new hires are largely entry-level employees or people in their 20s or early 30s.

The FKI predicted this year’s new hires for large companies will be 126,394, a 4.2 percent decrease year on year. On the other hand, the overall number of employees for 30 major groups in the country will reach 1.18 million, up 1.6 percent from the previous year’s 1.17 million.

“The total number of employees working for these groups continued to rise starting from 2014,” Chung said.

The top 10 groups plan to recruit a total of 79,144 people, down 1.6 percent from the previous year. They will account for 62.6 percent of the total number of employees the 30 major groups will hire this year.

Last year, the top 30 conglomerates planned to recruit 122,051 people but ended up hiring 131,917, 8.1 percent higher than their initial plans. The FKI said this was mainly due to the government’s “200,000-plus youth job creation project” started last year. The FKI said that both companies and the government were able to find new markets to allow more hires.

“The local and global economies are slowing down, and companies now face difficulties paying wages, since the retirement age has also gone up,” said Song Won-keun, a director at the FKI. “However, it appears that these 30 groups are trying their best to hire as many people as possible.

“I really hope that the National Assembly passes bills related to reforms, including restructuring the labor and service sectors as early as possible so that the labor market can grow once again.”

The survey was conducted from Jan. 19 to April 18. The FKI chose 30 groups from a list for the Fair Trade Commission, ranking groups by assets.

Due to these concerns, 52 percent of the companies said they have no choice but to cut the number of new hires this year.

“Many worried that the rise in the retirement age might have a negative impact on local companies’ recruitment plans, and the survey shows they were right,” said Kim In-seok, a team leader at the KCCI.

According to data released earlier this month by Statistics Korea, the unemployment rate in March among job seekers aged 15 to 29 was 11.8 percent, 1.1 percentage points higher than a year earlier and a record rate for March historically. The rate rose to 12.5 percent in February.