‘Sun’ star is at the top of her game

‘Sun’ star is at the top of her game 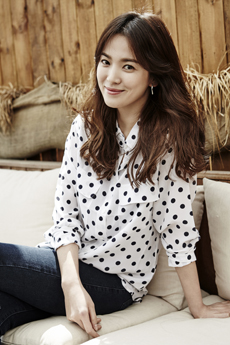 The fanfare around the megahit drama “Descendants of the Sun” is only getting bigger since it aired its last episode a week ago, but lead actress Song Hye-kyo has been spending her time relaxing since the drama finished.

“I watched the last episode with colleagues of my agency and had a drink of wine to celebrate afterwards,” Song told reporters at a press conference on Thursday. “I always try to have some time of my own to clear my mind after one drama finishes, and I think it’s time to do just that these days.”

But looking back on the six-month filming process last year, and the sensation the drama has created in Korea and abroad, the 34-year-old actress said she is just “grateful.”

“I met so many good people and became friends that at one point, I wondered if I deserve these people,” she said.

During the one-hour event where she answered a series of questions about her work and personal life, Song stayed calm and humble throughout, comfortably discussing her thoughts on acting and where she wants to go in the future.
Here are edited highlights from the interview.


Q. How do you feel about the drama’s monumental success?

A.It was a joy every night to read all the good articles written about the drama and about my colleagues before going to sleep. This drama was an especially important piece for me because it was my return to the small screen after three years, during which small and big events happened. I participated in this project thinking it could be my last. Thankfully, the result turned out to be good, and it endlessly made me think that I should try harder.


How was Song Joong-ki as an on-screen partner, and what was he like in real life?

When I first read the script, I thought the role of male lead was extremely important, up to the point where it decided if the drama was going to succeed or not. Joong-ki was able to pull that off very charmingly. At one point, he showed acting that even made me nervous on site, and it is not hard to imagine what viewers would have felt about him.

And in real life, as many of his fans are already aware of, Joong-ki is a very good-mannered, polite guy. What I liked most about him is that his attitude stayed the same from the starting point until the end. The shooting process went on for six months, which is longer than usual, and usually, people get tired near the end and get annoyed easily. But Joong-ki wasn’t like that. He took care of even the youngest staff member on site. I have been in the TV scene for quite some time now, and I’ve seen some actors who act the opposite of Joong-ki. I thought there was a lot that I should learn from him.


Song Joong-ki’s popularity skyrocketed as a result of this drama. How do you feel about that?

I recently went to Hong Kong with Joong-ki for drama promotion. I was aware of his popularity only through the news, but seeing it for real was truly amazing. His popularity was no joke. I felt very proud of him as if I were his mom. He is becoming a vital force in the new Korean Wave.


You were recently the subject of rumors with Song Joong-ki when you two were photographed having meals together in New York. What was that about?

I was traveling to New York after the drama finished and happened to know that Joong-ki was in New York, too. I thought it would be even stranger to not grab a meal with someone you had been working with for six months. But you would be surprised if you knew how many people you come across when visiting New York. And about the couple bracelet, I know that he has many of them from his stylist, but mine was just a hair tie. But now you guys all know the truth (laughs).


Some believed that the romance between the two characters — Kang Mo-yeon and Yoo Shi-jin — developed too quickly. Did you feel that while filming or afterwards?

I didn’t feel that at all when I first read the script. I guess there were some parts that got omitted during the editing process, but overall, I am very satisfied with the end result. And I think that is what makes dramas attractive. It is not reality but something that can happen only in your imagination.


It has been 20 years since you debuted in the industry. What kind of actress do you want to be?

When I was young, I just carelessly thought that when I enter my 30s, I would be able to act more easily. But that was completely not true. Every time I go into a new project, I get butterflies in my stomach. I am always stressed about how I should analyze my character.

At the moment, I don’t have any specific plans for the future. My next project may be a Korean production or a Chinese one. The fact is that I want to star in some more diverse genres, but as you guys may already know, there aren’t that many diverse characters for actresses in Korea. I hope more types of female characters emerge so we can show our versatility. I hope filmmakers and drama producers can be of help in this way for Korean actresses.