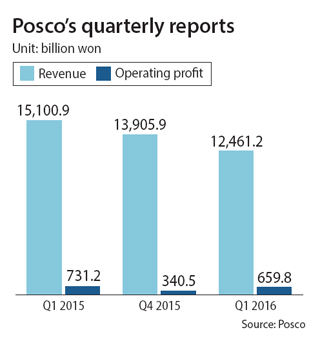 After taking a historic beating last year, Posco is showing signs of recovery.

The company said its profits in the construction and steel businesses decreased from the previous quarter but that its trading units, PoscoDaewoo and Posco China, reported improved profits. Its overseas affiliates also performed well, as Posco Mexico turned to profit this quarter and the operating losses in Indonesia’s PT Krakatau Posco have significantly decreased.

The company had its worst year ever in 2015, reporting losses (90 billion won) for the first time ever since its establishment in 1968, mainly due to oversupply issues caused by Chinese rivals and decreasing demand in the auto and shipbuilding industries.

However, the company was able to make a comeback thanks to the overall market conditions in China and elsewhere improving.

“We had a tough time as the prices of Chinese products were too low,” a Posco spokesman said. “But since the condition also gave Chinese steelmakers a hard time, the Chinese government has intervened to adjust the local prices lately, and because of that, we expect the overall price of steel products to rise for the next few months. The Chinese steel industry will continue restructuring this year.”

Reflecting the announcement, Posco’s stock rose by 3.76 percent from the previous session to close at 248,500 won per share on the benchmark Kospi.

“Posco has been undervalued, but as prices in the global steel market have been increasing lately, it will attract more investors,” said Byun Jong-man, a researcher at NH Investment & Securities.

While the market conditions are getting better, the company’s chairman, Kwon Oh-joon, continued to accelerate his restructuring efforts.

After a management reform announcement last July, the company completed six cases of organizational restructuring in the first quarter, including the sale of Genesys, an affiliate in the power generation industry. The company also announced its annual sales goals, saying that it aims to make 58.7 trillion won in revenue in 2016. It expects total crude steel production to reach 37.2 million tons and sales of its products to reach 35.3 million tons.

But the company’s debt-equity ratio only dropped by 1.4 percent from the previous quarter to 77 percent on a consolidated basis, so Posco is expected to speed up reorganizing its overall business portfolio.

The company is expected to reveal the related plans in late October, according to industry sources.