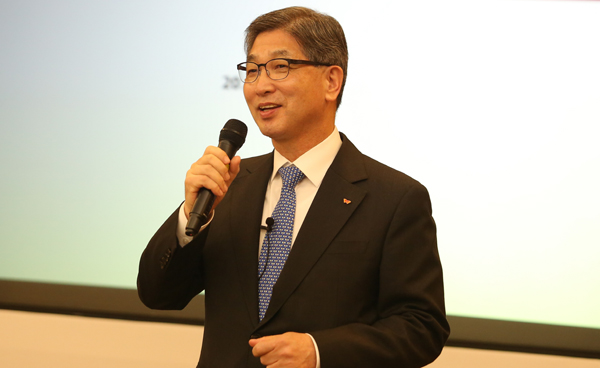 The petrochemical industry is enjoying a short-term rebound but will later face a prolonged downturn and low growth, said Chung Chul-kil, CEO and vice chairman of SK Innovation.

“We have entered a low-growth era with a short-lived boom and long-term decline,” Chung said during a press briefing on Wednesday. “To pre-emptively respond to the downturn, we will keep on carrying out restructuring.”

Chung made the somber assessment after he managed to turn around the company last year following operating losses. The company reported an operating profit of 1.98 trillion won ($1.7 billion) in 2015 compared to a 224.1 billion won operating loss the previous year.

The operating loss was the first yearly loss in the company’s 37-year history, which prompted SK to tap Chung as the new CEO of the oil unit starting from 2015.

Chung, who repeated the words “uncertainties” and “challenge” throughout the press briefing, said, “We are benefiting from tensions among oil-producing countries for the time being. But this will be temporary. No one knows how things will unfold in the future.”

He also outlined a strategy for the electric-vehicle (EV) battery business, the company’s latest focus.

“We plan to build a plant in China to supply EV batteries,” he said. “The plan will become more specific within this year.”

If the investment goes as planned, the plant will become the first overseas production line producing EV batteries.

The move is intended to diversify SK Innovation’s business portfolio beyond oil refining, since the business largely depends on market conditions.

Industry insiders say SK Innovation was able to turn the company around last year due to improved profitability in the oil refining business. The company said it made 1.3 trillion won in operating profit from oil refining, which accounts for about 65.6 percent of its entire operating profit.