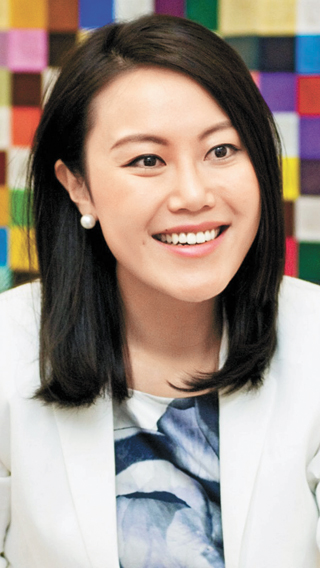 TriBeluga, a two-year-old Chinese incubator based in Seoul, has a unique mission: to identify promising start-ups in Korea and the United States at a very early stage, fund and nurture them, and help them expand into China.

TriBeluga takes care of marketing and branding as well as legal service.

Having launched an office in southern Seoul in October 2014, the company announced in February that it has invested in two Korean start-ups: nThing, an Internet of Things-based monitoring service for plants, and Vtouch, which has developed gesture-recognition technology that enables users to control smart devices without touching them. (The amount of TriBeluga’s investment was not disclosed.)

>“When companies think of entering the China market, we want people to think of TriBeluga as the platform to help them succeed,” Lili Luo, CEO and founder of TriBeluga, said in an email interview with the Korea JoongAng Daily.

The 30-year-old businesswoman was born in Chengdu, China, raised in Hong Kong and Sydney, and studied marketing and hospitality in the United States and Switzerland. Before establishing TriBeluga, she led businesses in a wide range of industries in China - from real estate to technology to marketing and public relations.

Q. How did you come up with the idea of building a cross-border incubator business connecting China, Korea and the United States?

A. My vision for TriBeluga was established when I spoke to numerous Silicon Valley leaders at a 2013 Fortune Global Forum in Chengdu. I learned that many Western companies - even very experienced ones - have outdated, partial or misleading information about China. I also realized the impact that China could have on the rest of the world. Silicon Valley has been developing technology that changes how people think and behave. Korea has great need for China market entry as well as a mature IT infrastructure. Korea is conveniently located to work with China as well. China is a very challenging market, with a massive population and growing consumer spending. These three countries are well-suited for cross-border and cross-industry collaborations.

What made you name the company TriBeluga?

TriBeluga is a compound of “tri,” meaning three, and “beluga.” Tri refers to China, Korea and the United States. Beluga is a small white whale species known for its smart social behavior.

How are nThing and Vtouch doing?

[The start-up] nThing recently completed its Kickstarter campaign for Planty, its first-generation smart Internet of Things product. TriBeluga is working on a targeted market plan for distribution. Vtouch continues to make strides with its gesture-control technologies and is working on various ways to commercialize its technology, especially in the auto, smart housing, hospitality and entertainment sectors.

Do you have any additional Korean start-ups in mind for future investment?

TriBeluga is continually looking at technology companies in Korea and is actively looking to make additional investments, in particular, in the health care, education and environment industries. Artificial intelligence technology is an area that has been garnering a lot of attention, and we are also open to looking at promising start-ups in this space. But we want to be careful about investment because we feel responsible for every growth step that our partner start-up is going through. Working with TriBeluga is not only about receiving some investment in exchange for shares. It’s about joining a pack of belugas and riding the wave with them.

Do you have any advice for Korean start-ups?

Korea is a country that is extremely advanced in terms of technology and mobile usage. The country also shares the same entrepreneurial drive as many in China. In this sense, Korean start-ups are a good fit to enter the China market - if they have the right guidance. We believe we can provide the right networks and direction to help those companies successfully execute in China. I would recommend that they learn more about China’s economic and political system to understand how key decisions are made, and understand the diversity of regional markets and in consumer behavior.

What are the hottest technologies in China now?

Virtual reality, robots, the Internet of Things and drones were hot topics during the CES a few months ago. Many Chinese companies excelled in those fields, given the demand for paid entertainment content [video] is increasing. Industry-wise, information technology, clean technology, health care and biotech, and advanced manufacturing would be the key sectors to watch in the next few years.

Koreans are increasingly overwhelmed by Chinese money flowing into the Korean economy. What’s your opinion on this?

China’s overseas investors are especially interested in technology, energy and infrastructure businesses. Chinese money has also flooded into the Korean entertainment business. But it is probably not wrong to say Chinese investors will be aggressively investing in such businesses all over the world. After the Korea-China free trade agreement implementation, foreign direct investment surged in Korea. Chinese money inflows increased, and other direct investment also increased by foreign companies that want to leverage the Korea-China FTA in both new and traditional industrial sectors.