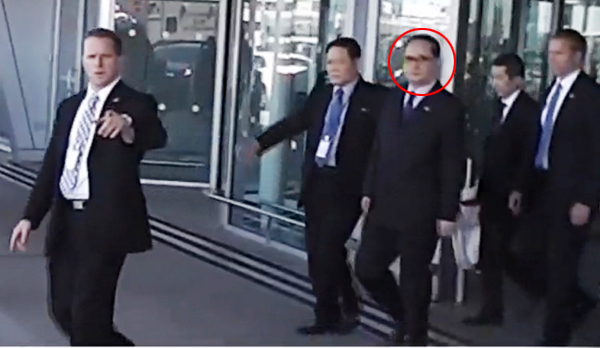 North Korean Foreign Minister Ri Su-yong arrived in New York on Wednesday to sign a global climate agreement at the United Nations on Friday, an unusual move that led to speculation that he may be making contact with U.S. officials there.

Ri was spotted by reporters arriving in Beijing on Tuesday, and he flew into New York from Dubai aboard an Emirates flight rather than a Chinese airline.

This could be seen as an indication that North Korea-China relations have worsened due to Beijing’s growing frustration with its traditional ally’s nuclear and missile tests.

It is relatively rare for a North Korean foreign minister to visit New York, although this is Ri’s third visit to UN headquarters since 2014.

Some wondered if Ri would meet with U.S. Secretary of State John Kerry, who will attend the high-level ceremony on Friday to sign the UN climate change agreement adopted in Paris last December.

John Kirby, a spokesman for the U.S. State Department, told reporters Wednesday that Kerry is not scheduled to meet with Ri during his visit to New York.

“What we want to see out of the North is a concerted effort and a willingness to commit to denuclearization on the peninsula,” Kirby said, “and to stop the provocative activity which we continue to see.”

He added that Washington takes such threats “very seriously.”

Seoul and Washington have stressed that implementation of UN and unilateral sanctions on Pyongyang is currently their priority. However, a number of U.S. officials have pointed out that the door is open to dialogue should North Korea be ready.

Kerry, during a trip to Japan earlier this month, said that Washington is prepared to negotiate a peace treaty to officially end the 1950-53 Korean War to replace the current armistice agreement.

Prior to his visit in September 2014, a North Korean foreign minister had not attended a session of the United Nations in 15 years. Since Ri became the top foreign affairs official of his country in April 2014, he has been active on the diplomatic front, traveling across Southeast Asia, the Middle East, Africa and Europe.

Stephane Dujarric, the secretary general’s spokesman, said that Ban is not scheduled to hold a meeting with Ri.

Minister of Environment Yoon Seong-kyu will head the South Korean delegation to formally sign the so-called Paris Agreement at the ceremony on Friday, joined by some 150 countries in a show of global commitment to respond to climate change.

The two are expected to discuss how to implement the United Nations Security Council resolution passed last month that imposes strict sanctions on North Korea for its fourth nuclear test, as well as ways to deter other provocations, according to the South’s Ministry of Foreign Affairs.