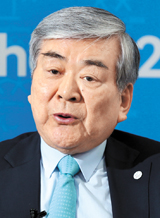 Cho Yang-ho, the chairman of Hanjin Group, announced on Friday that he would give up control of the group’s container carrier, Hanjin Shipping, to help normalize its management through restructuring.

The nation’s top shipping company held a shareholders meeting earlier in the day and agreed to push ahead with self-rescue measures, according to the regulatory filing. The company will request approval from its creditors on Monday. Should creditors including a handful of commercial banks issue the approval, the shipper’s maturing debts will be rolled over, and part of them will be rescheduled starting as early as the beginning of May.

“We have seen operating profits, unlike other shippers, through painful efforts including cost reduction,” the company said in a statement. “But we were forced to seek normalization with the help of creditors.”

The statement added that Cho’s move is meant to “revitalize the failing Korean shipping industry.”

Top national flagship carrier and affiliate Korean Air is the top shareholder with a 33.23 percent stake.

After his younger brother Cho Su-ho, who used to run Hanjin Shipping, suddenly died in 2006, the Hanjin Group Chairman gave control to an outside management expert rather than another sibling, and transformed it into a holding company in 2009.

But the company’s earnings have been on a downward slide, as the overall shipping industry has slowed and hefty charter fees undermined profits. The company sold 1.7 trillion won ($1.5 billion) of its bulk carrier business and raised capital through new share issuance, but debt snowballed to as much as 5.6 trillion won at the end of last year. The company needs to pay off or refinance 500 billion won of its debt by the first half of the year.