Hottest apartments in town have terraces

Hottest apartments in town have terraces 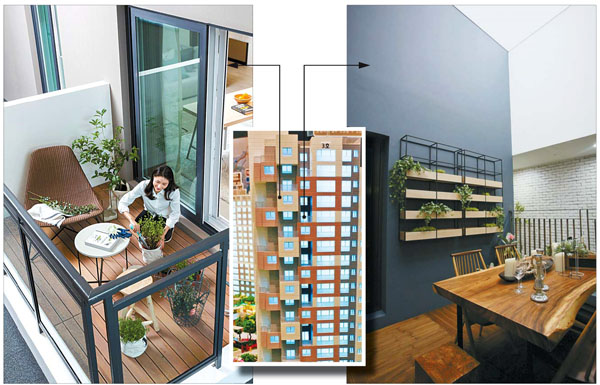 The outdoor and indoor terraces of units at the Hillstate apartment complex in Sejong City, which went on sale last week. [GS E&C, HYUNDAI ENGINEERING]

When it comes to apartment presales, the popularity and price of units typically rise the higher they are in a building.

This wasn’t the case at a new complex in Hongje-dong, northwestern Seoul.

An average 3.6 buyers applied for each apartment, but when it came to the 84-square-meter (904-square-feet) T-shaped apartments on the first two floors, the average number of buyers shot up to 18.

The reason: the 36.4-square-meter terraces attached to those units, which tenants can use like a personal garden.

Another trend driving presales has been the shape of apartments. At one complex in Jinju Innovation City in South Gyeongsang last month, the same 103-square-meter apartment was offered in two shapes: square and rectangle. While each square-shaped apartment drew an average 29.3 applicants, the rectangular apartments saw 57.6.

Apartments with terraces or a rectangular shape are becoming hot items in the real estate market, which is a stark contrast to last year, when many renovated their apartments to get rid of their balconies in an effort to widen their living rooms.

Terraces used to be something only ground-floor or rooftop apartments had, but with buyers’ interest rising, new buildings are offering them for all.

Each of the 573 units at an eight-story apartment in Gwangju, Gyeonggi, sold by construction company Daelim Industries last month has a terrace between 4.9 square meters and 7.6 square meters.

Similarly, Busan-based Kahwa Construction offered apartments last month where all units had their own terrace.

The reason for the rise in popularity is improvements in construction technologies. Typically, most terraces have protruded from apartments, offering tenants little privacy. But at new buildings like One City in Goyang, Gyeonggi, which went on sale earlier this month, terraces are actually built inside the apartments.

At One City, the indoor terraces are 12 square meters, or roughly the size of a double bed. The ceilings are also twice the height of most other buildings, lending the units a spacious feel.

“Because it’s indoors, the area isn’t exposed to other people,” said Lee Jeong-seop, part of the apartment’s construction and design team at GS E&C. “Therefore, residents don’t have to worry about having their privacy invaded,”

Third-floor units will have a terrace installed on the side of the apartment, and units on the other 15 floors will switch between the different formats.

Terraces are not considered a “living space” under Korean construction regulations and are instead categorized as a “service space,” so they are not reflected in the cost of an apartment. This is in contrast to balconies, which have roofs or a ceiling and are included in the entire size of the apartment when they exceed 1.5 meters in width, thus adding to the cost.

“Because terraces are not included in the overall space of the apartment, residents can feel like they’re getting a larger apartment at a lower cost,” Park said.