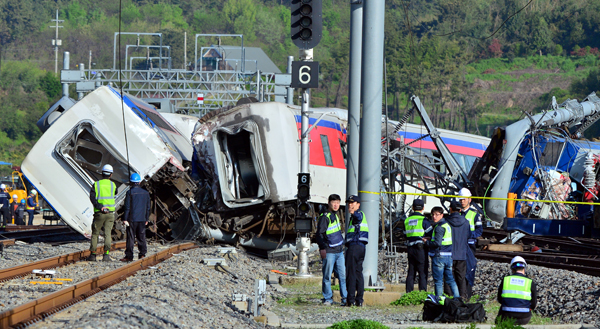 The Korail-operated No. 1517 Mugunghwa train bound for Yeosu derailed near Yulchon Station in South Jeolla on Friday morning, killing the engineer and wounding eight, including the deputy engineer. [NEWSIS]

A train derailed Friday morning in Yeosu, South Jeolla, killing the engineer and leaving eight wounded. It appears the train was going way too fast.

The Korail-operated No. 1517 Mugunghwa train bound for Yeosu left Yongsan Station at 10:45 p.m. on Thursday. After passing Suncheon Station, it was heading to Yeosu-Expo Station when the engine car and four passenger cars derailed at around 3:40 a.m. The train had a total of nine cars.

At the time, five crew members and 23 passengers were on board.

Seven passengers in the four derailed cars were injured. They were treated and sent home. The deputy engineer is still receiving treatment in a hospital, according to police. His life is not in danger.

The engine car flipped over, and authorities assume the train’s driver died at that time. Further autopsy results are needed to determine the exact cause of his death, police said.

Authorities suspect that the reason for the train’s derailment lies with the deputy engineer’s failure to follow directions from the control tower. “We suspect the train derailed because it did not slow down when changing tracks,” a Korail official said.

The deputy engineer told the Gwangju Railroad Police that at the time of the derailment, the train was running at a speed of over 120 kilometers per hour (75 miles per hour).

With maintenance work being done near Yulchon Station, trains passing by had to switch from the upper tracks to the lower tracks. When switching tracks, trains need to operate at a speed less than 45 kilometers per hour.

The Aviation and Railway Accident Investigation Board of the Transport Ministry will investigate the exact reason for the train’s derailment.

The Yeosu Fire Station and authorities on Friday mobilized around 160 workers, along with some 50 ambulances, fire trucks and cranes.

With four cars derailed and the engine car overturned, 400 meters of tracks near Yulchon Station were ruined, paralyzing all scheduled trains northbound and southbound on the Jeolla Line between Suncheon Station and Yeosu-Expo Station.

Korail expects to resume normal operations by the time the first train departs from Yeosu-Expo Station at 5 a.m. Saturday.