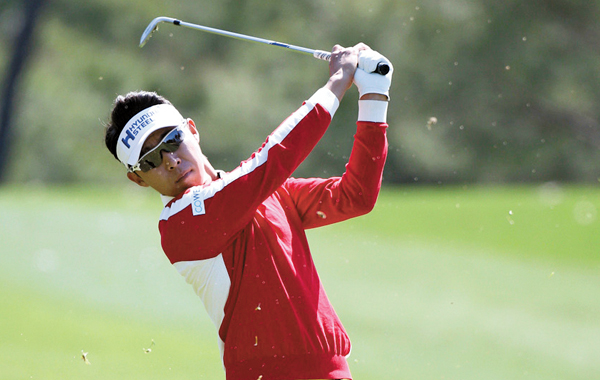 Korean professional golfer Choi Jin-ho takes a shot during the final round of the 2016 Dongbu Insurance Promi Open on Sunday. Winning the opening event of the Korean Tour, Choi is going into the 2016 season with high hopes. The next event, the GS Caltex Maekyung Open, starts on May 5. [NEWSIS]

The tournament was a rather difficult journey for all participants. The first round, which began Thursday, was postponed for five hours due to heavy rain and fog. Although the second round started as scheduled the next day, it was called off early around 5 p.m. due to, yet again, heavy fog. The remainder of the second round was to start Saturday at 7 a.m., but it was once again delayed because of fog for an hour and 15 minutes. After the second round finally came to an end that morning, the third round began at about 1:30 p.m.

Choi notched an early lead in the third round after carding four birdies before the break in the second, third, sixth and eighth holes. But Choi got into a trouble at the 4-par 13th hole, allowing the first bogey of the day after he bunkered his tee shot and missing a 3-meter putt to record par. But after a brilliant birdie on the next hole, Choi wrapped up the day with 16-under the record with three holes remaining in the third round. Choi came out in Sunday morning to finish off the remaining holes of the third round on-par.

During the fourth round of the Promi Open on Sunday, Choi went 71-under to tally 17-under 271 to finish first in the tournament. Choi in fact had a rough day on Sunday, belting one bogey on the 10th hole and one double bogey on the 4-par 16th hole with only four birdies for the day. Choi’s second shot on the 16th hole went out of bounds, forcing him to take a one-stroke penalty. He failed to put the ball in the hole during his bogey putt attempt to earn double bogey. However, Choi parred the remaining 17th and 18th holes to finish the final round 71-under.

“I started the fourth round in the lead by a big difference in the score,” said Choi after his win. “But that made me more nervous. I now have a chance to grab multiple wins this season and I hope to do so.”

Choi is off to a good start this season after winning the opening event. In the last year alone, Choi has played in 11 Korean Tour events, winning the KPGA Tour SK-Telecom Open last May.