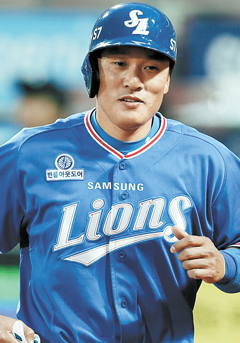 Baseball is a difficult game, according to one of the most celebrated sluggers in the Korea Baseball Organization: Lee Seung-yuop of the Samsung Lions.

Despite being 40, Lee is in top physical form. He’s played professional baseball for 20 years now. However, he is always the first one spotted on the practice field. He also refuses to let up, constantly thinking about how he could further improve his game.

“I have too many memorable moments and records to be satisfied at where I am at the moment this season,” said Lee. “The memories compel me to go at it harder in each game and practice.”

Joining the pros in 1995, Lee is deemed one of the top baseball players in the history of the KBO. He is a five-time home run leader and four-time runs batted in (RBI) leader. But that is only the tip of the iceberg in his list of accolades. The Lions designated hitter also has five KBO League MVP trophies, nine KBO League Golden Glove Awards trophies and one Korean Series MVP trophy on his shelf. In 2003, he set the record for the number of home runs hit by a single player in a single season in Asia with 56 home runs. The record stood for the next 10 years, until it was broken in 2013 by Wladimir Balentien of the Tokyo Yakult Swallows, who had 57 dingers.

“Ten years is not a short period of time,” said Lee, hinting that he is no longer the hitter he was during his heyday. “Before, I would have been bolder on the plate. But things don’t go the way I want them to anymore. I would be satisfied with where I am right now, but I simply can’t, thinking about the old days when my performance peaked.”

“But I think that dissatisfaction is sort of the drive that pushes me to play harder,” he added. “I cannot fully be content with my performance just yet.”

So the veteran presses on. Lee is the first Lions player to arrive at the stadium for home games. He then either goes through a light weight training or physical therapy session. He does his batting practice early as well.

“I feel better being at the stadium than at home on a game day,” said Lee.

The same goes even when a game starts. Waiting for his turn at bat to come around, Lee is often seen swinging his bat in front of the dugout from early on. During home games, he takes advantage of the indoor training center and warms up with the batting machine before heading to the plate.

Lee also likes to try out new things when it comes to his batting form. “Even these days at every at-bat and practice, I wonder if this is the right batting form for me,” Lee explained. “I am not entirely fond of my current form, as if I am wearing a new clothes or shoes which I have to tailor to my fit.”

“Maybe it is because I am a designated hitter that I have so much time to think and worry,” he said, laughing. “Baseball sure is a sport with never-ending challenges.”

But despite his humble words, the veteran’s presence at games is still noted by fans. After hitting a record-breaking 400 home runs last year, he is on his way to surpass 450 KBO career home runs this season. In 2014, Lee became the oldest player in the KBO to have over .300 batting average (BA), 30 home runs and 100 runs batted in (RBI) in a single season, and he is aiming for his 2,000th career hit this year.

“I thought I was the type of player who could take advantage of chances given,” said Lee. “But I don’t think that’s the case any longer.”

Although he is modest, his BA during scoring opportunities this season is still solid at .444, or 8-for-18.

“I need a lot of work,” he added. “But I am hoping things will get better once the weather gets warmer.”